Video games are no different. Nudity has been in gaming since the 80’s, and it’s just as shitty as you would imagine. 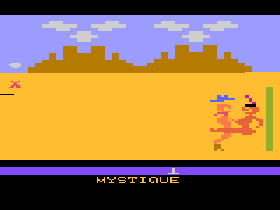 Christ on a crutch. That’s horrible nudity. What is that kooky shit? A LEGO man with a Shriner’s hat on jump-kicking his buddy through his stomach? Fuck me, I’d seriously have more chance being titillated by this.

Thankfully, it’s not the fucking dark ages and we have insanely powerful gaming consoles like the PS3 and XBOX360, along with computers to take tits and ass to the next level of digital finesse and of course, pointless gratuitous nudity. Here’s a list of some impressive, oft hilarious instances of sex in video games!

I’ve also painstakingly linked all the photos to video clips so you can cut straight to the action!

Nothing like handing digital stacks to two-sided sexy sprites and then immediately blowing them away. Ah, I’ll always have fond memories of Duke Nukem 3D.

Goddamn girl, those tits better do my laundry

Too bad the rest of the game is crapola

7.) Shadows of the Damned