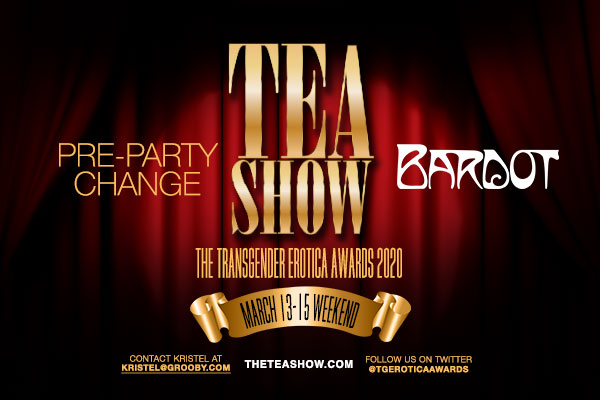 The official TEA Pre-Party venue returns home to the Avalon’s connecting property, the Bardot, on March 13, 2020. The TEAs report their original venue, the Sayers Club, suddenly pulled out of their contract almost six weeks before the event.

“Despite having the Sayers Club confirmed and signed in August, they now make an unbelievable claim that it was double-booked,” said TEA creator and Grooby CEO, Steven Grooby. “I can only believe that someone in their hierarchy has seen that this is an event by an LBGT adult company and have reasons to themselves as to why they don’t want us there. I’d urge any LGBT company, or persons to be very wary of dealing with them and we’re looking at actions to take against them.

“On a more positive note,” he added. “Returning the Bardot feels like going home – they’ve consistently helped us with our shows and we’re very happy that they can accommodate us at a late notice. We’re planning to invest a lot more into the look of the pre-party this year thanks to extra Pre-Party sponsorship from Kink and TranzFanz and I think everyone will be surprised and exhilarated at the new ideas we’re bringing.”

The Bardot in Hollywood is a posh open-air lounge that has an old school glamorous Hollywood-vibe. It has been the longtime home of the Transgender Erotica Awards’ Pre-Party and former After-Party for multiple years.