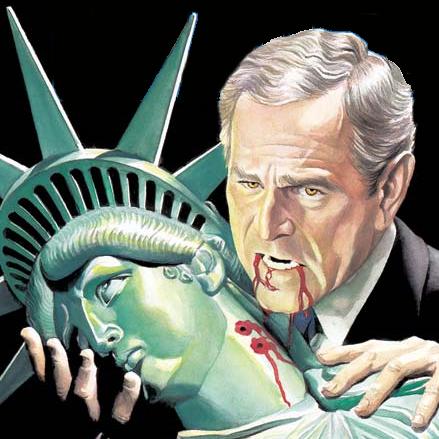 If there was ever a time for you to pay attention to politics, it’s right fucking now. The 2012 election is mere days away and there’s a real chance that crazy Mormon fuck, Mitt Romney could get elected.

If you thought George W. Bush was societal poison, wait until you see chronic liar Mitt Romney at the wheel. Let’s compare and contrast, shall we? Bush was widely regarded as being Dick Cheney’s little S&M monkey. Everyone at one point thought Bush was quasi-retarded and they were right. Bush wasn’t evil per se, just really shockingly stupid.

Mitt Romney, on the other hand, has been caught blatantly lying about everything from his tax returns to Jeep outsourcing parts and labor to China (which is utter bullshit). Even when this SOB gets caught red-handed, he just spins whatever latest gaffe into slogans for his next T.V ad!

Mitt Romney will say anything and everything to win. He’s like a self-entitled Lannister brat with a sadistic disregard for the so-called “47%.” Oh, and he also wants to ban abortion rights across the board, making abortions completely illegal up to the federal level.  This is the same deluded motherfucker who believes in magic divining rocks and polygamy. We’ve all seen that South Park Mormon episode/documentary. That’s one of the rare times when life is stranger than fiction.

For those of you who couldn’t care less about crusading for public reforms and championing crucial legislature for the betterment of society, scroll down that greasy mouseball and check out the sexiest, hottest female politicians in the world!