While the office building appeared to be empty, the building across the street was full, had full view and applauded the man for his courage and persistence.  But not before they snapped this picture and sent it to the internet having it go viral. 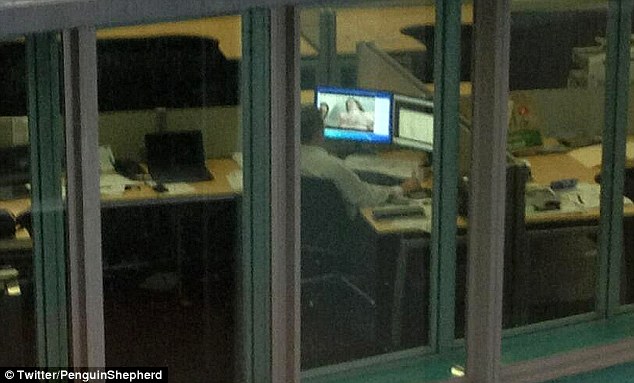 You never know who is watching.  And this is the proof.  One lonseome worker in Australia learned the hard way, when he was caught red handed pouring over a grpahic x-rated video at his desk–by office employees across the street.
The picture was taken by an employee across the street with the Twitter user name James P in brisbane who posted it on the social networking site for the world to see.  It immediately went viral.
His alone-time was frustratingly cut short when he noticed the gathering crowd of workers at the window behind him.

While all that dark smoke was coming out of the roof, was their any doubt that those Cardinals were smoking holy reefer, trying to figure out a reason to make the rest of the world actually still give a fuck about them?

They decided to elect a new Pope.

Here are 16 facts about the holiest of holies.

3. He is an Argentinean

4. He is the first Jesuit priest to become Pope

5. He is the first Latin American to become Pope

6. He was the runner-up during the last conclave that elected Pope
Emeritus Benedict XVI

7. He is a conservative known for his strong anti-gay stance. In 2010 he described homosexuality as a “destructive attack on God’s plan.” He was a fierce opponent of Argentina’s decision to legalise gay marriage in 2010, arguing children need to have the right to be raised and educated by a father and a mother.

8. Though conservative, he has criticised priests who refuse to baptize babies born to single mothers

9. He also believes condom can be permissible to prevent disease

10. He is well known for his austere outlook to life. He is famed for taking a bus to work every day in his native Argentina, giving up his driver and official limousine

11. His austere outlook towards life explains his choice of Francis as his papal name. Francis Assisi, who he is named after, is a popular Catholic saint who lived humbly and gave possession away to the poor

12. When he was made a cardinal, he persuaded hundreds of Argentineans not to fly to Rome to celebrate with him but instead to give the money they would have spent on plane tickets to the poor

14. He is respected for his intellectual prowess.  A former chemist in his last life.

15. He is an anti-corruption crusader. He has also accused Argentina’s government of not doing enough to eradicate poverty

16. He has lived for more than 20 years with one functioning lung. His other lung was removed because of infection.

A Cool Website Everyone Needs To Check out is:

It was said that a porn company was going to release a sex tape of the mighty Jimi Hendrix a few years ago, but has since then been verified that it’s a hoax.  According to the remainder of the Hendrix family, they have refuted its validity.  In the end though, if there is smoke, there’s usually fire not far away.  How many of you out there know family members that would probably step up to bat for you guys?  Probably a lot, I mean… Isn’t that what family is for?  So if you make a sex tape, and it goes public by some crazy ex-girlfriend, isn’t it helpful having family members that go public to say, “yah that’s not my brother in the film. I’ve seen his cock and it’s certainly not that big!”

That’s what family is for.  To protect your ass, when you fuck up royally.

Well Cynthia Plaster Caster knows a bit about cocks, that range in all sizes. She’s been around. And knows what’s up…

Cynthia Plaster Caster, known for being the 60’s & 70’s groupie that took plaster casts of famous rockstars private parts, has a website that is very creative, and the amount of information included is pretty impressive.

The “recovering groupie” has been actually casting molds of famous people’s private parts as recent as 2006.  Thing is, if you look at the list of “castees” none or more famous than Jimi Hendrix.  She’s managed to get close to Led Zeppelin, The Who, and a few others, but only roadies, tour managers and bodyguards.  No band members.  The only one that is worth a mention is Jimi Hendrix.

But at the very least, I think this website is interesting, humorous, and  informative.  If you are looking to understand a character of the eras Cynthia P. Caster is a definite interesting read,  she has a sense of humor and is quite intriguing.  not to mention she’s a little bit of a hottite to boot!!!

Cynthia on the left

You can really tell after viewing her website, that this girl knows how to party, and is totally cool as hell!
check it out: cynthiaplastercaster.com