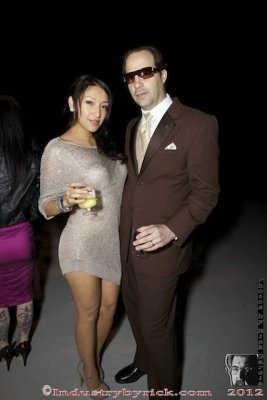 L.A. Direct News sits down with the sexy and talented Latina Star Vicki Chase. This woman has sexuality just oozing out of her, and you’ll find out how she got started, and what’s makes her a much sought after talent, and a favorite of fans and the industry alike.

L.A. Direct News: How did you start in the industry? We heard it’s a pretty interesting story? Vicki: Yes, it is an interesting story. I was working in a bank as a teller, and one of my customers was Eric John. He was always telling me stories about his shoots and the adult industry, and one day he asked me out. I went with him to an Exxxotica event in Los Angeles, and then as we got closer, I went with him on a few porn sets. The first scene I ever saw shot live was a blow bang scene, that was pretty hot. I met a lot of really great people, and I thought to myself “Hey I want to try this”. In the beginning, I shot for a lot of companies that Eric was working with, and eventually I came into my own. I married Eric at the AVN’s in 2010 in the Hustler booth, and it was a huge media event, and we’ve been happily married ever since. We also shoot for our own production company; Erotique Entertainment.

L.A. Direct News: When did you join LA Direct Models? Vicki: January of 2010

L.A. Direct News: What kind of scenes do you like performing in? Vicki: I really love everything, I love gonzo, so I show my dirty side, but I also love features. I love acting as well, and doing dialogue scenes. As long as I get to do a real performance, then I’m good. I don’t like to be robotic, I give my all when I do a scene, and when I do it shows on camera.

L.A. Direct News: What is the company you and your husband Eric John have? And what kind of production do you do there? Vicki: Erotique Entertainment is our company. Our main focus now is the live webcam shows for Streammates and Cam Models, and we do this seven days a week. All kinds of scenarios from 10am to 12 noon. We are also planning on making original feature productions.

L.A. Direct News: What is it like with two well known and busy working performers in the family? Vicki: Well, it’s very much a partnership and friendship, we’re always there for each other. It’s a lot of work, but we have each others back, and we encourage each other so much. We support each other very much.

L.A. Direct News: What is it about Latina women that make them so sexy? Vicki: We’re just passionate, we have a lot of passion in us, wheter we’re angry, happy, or fucking, we let it all out.

L.A. Direct News: What are your new projects coming out, and what new productions are you going to start? Vicki: The new “Zorro” movie for Pleasure Dynasty Adam & Eve “Tango to Romance” Digital Playgrounds “Home Wrecker”

L.A. Direct News: Do you prefer features or gonzo shoots? Vicki: Like I said before, I love them both, but if I really had to choose, I’d prefer features.

L.A. Direct News: What do you do in your spare time? Vicki: in my spare time, I’m clean the house, I go to the movies a lot , and listening to music, I listen to just about everything.

L.A. Direct News: Do you think roles for Latina and Latin performers are opening up more now? Vicki: I’d like to think it’s getting better, if they give us the opportunity we can shine. I hope it gets even better. I don’t like to be cast just because of the color of my skin, but based on my work and performances. I very proud of being a Latina, because that’s who I am.

L.A. Direct News: Where can people follow you, and what is your website? Vicki: twitter/vickichase  vickichasexxx.com is going to be launched real soon, I’m building content for that now, and it will have everything on it.