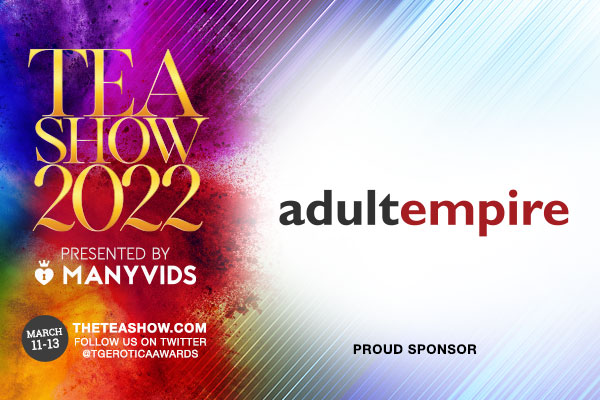 “The TEAs embrace the same spirit of diversity and inclusion that we value so highly at Adult Empire. We’re delighted to return as a sponsor for this incredible brand,” said Madison Greene, an Adult Empire representative.

“Adult Empire has been a longtime supporter of our event,” added TEA Executive Producer, Kristel Penn. “Their platform is so integral to the success of our show. Each year, the company generously donates access to their site for TEA judges, so they are able to review DVD content for our nominees all in one place. This has streamlined the judging process immensely in more ways than I can express. They have a huge catalog of trans content available on their site and we respect how the company continues to feature trans performers with equal exposure to other genres without asking for recognition or credit, but because it’s the right thing to do.”

Award-winning online adult retailer and entertainment site Adult Empire is a top provider of adult entertainment, with an extensive library of DVDs and scenes available for instant streaming. In addition to its family of core sites, AE operates numerous membership sites for various top brands via its affiliate arm, Adult Empire Cash.

Sponsorship inquiries can be made to [email protected].