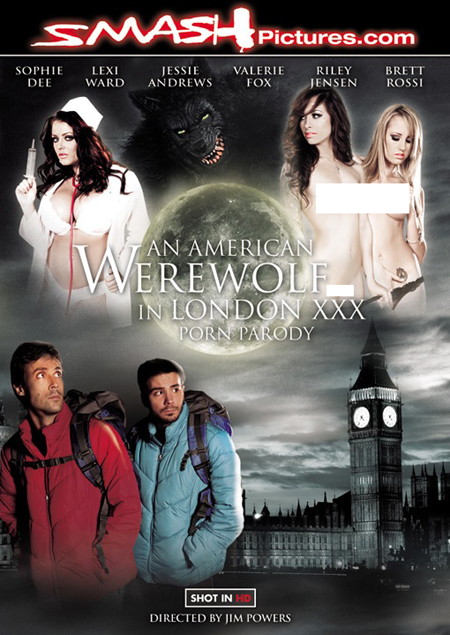 I haven’t seen the mainstream classic in years, but Smash brought it all back to my mind with their parody, and frankly I liked their parody better then the actual John Landis movie!

All the original elements are still there, but we now have a bit of comedy, and a lot of sex! Basically, two guys are backpacking across Europe. One night they get that creepy feeling and stop off in a pub, where Dane has a dally with the hot barmaid (Jesse Andrews). After being told NOT to walk around at night by the pub’s owner, what do you think they do? Of course they head out for a walk! One of the backpackers (Dane Cross)  is attacked by a werewolf, and the other guy (Richie) is scratched trying to save him.

Richie awakens in the hospital to find out that Dane was killed. Every time Richie falls asleep after that, Dane shows up to talk to him, more and more decayed. A sweet nurse (Lexi Ward)  brings Richie home from the hospital to stay with her while he recovers, and she helps him get on the mend with a nice friendly fuck.

There is a girl/girl with Riley Jensen and Brett Rossi done with scary skull masks on, while Richie is dreaming. Then there was a standard boff between Valerie Fox & Anthony Rosano.

They did save the best sex scene until last. Two long time pros, Ben English & Sophie Dee had a hot, enjoyable, fun, sexy scene and stayed in character. Sophie’s eyes & ass and Ben’s rock hard body and English accent pushed the scene over the top to a “nut” cracker.

I loved the English accents, the script, the acting, the scenery, the cheesy wolf, the well done gory makeup. The only thing that I didn’t like about the movie was too many tattoos on the girls. This really hurt some of the sex scenes in my opinion. The ink was distracting. A beautiful sleeve is one thing but lots of tatts, and especially words or lettering really kills it for me, personally. If you love tattoos, you will like this movie even more than I did, and you will probably give it a 10.

I just took a look for this movie and it costs about $20 bucks. You’d be crazy NOT to have it in your collection!

I had a chat on Twitter with Stuart, the Producer. I asked some questions and he gave me some interesting info…
Did you shoot in England? We shot most of the English stars non sex pickup scenes and scenery shots in London, then when they arrived to US, shot the sex scenes. We shot the tube station to the tee as original, Chelsey during chase, across from Big Ben for Dialogue, & St. Thomas Hospital. It was fun shooting in the actual London Zoo, where Richie wakes up with a real wolf dog.

Your fav scene? My Fav scene was the nazi lesbian werewolves, Brett Rossi & Riley Jensen in their masks, then they come off for the hot sex!

I hated the pink walls in one scene. You saw what pink walls lead them to do, right? Go on a killing rampage, even werewolves have taste for interior design lol  I will end this interview with a big Howl Howl Howl in honor of our werewolf pack! Cheers, Stuart ;.)