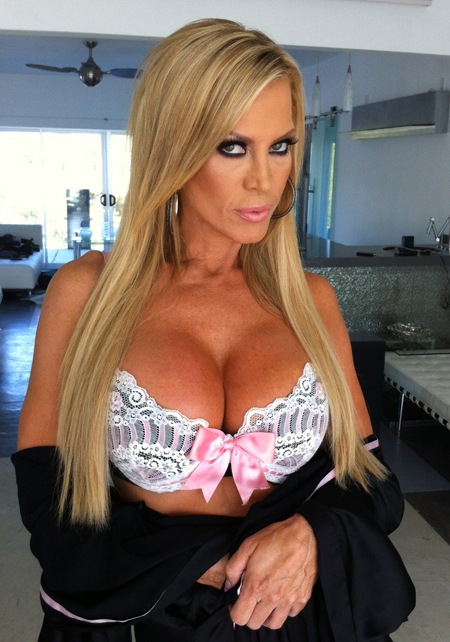 The shoot took place in a house high in the hills above the San Fernando Valley. The home’s modern decor could have been from the year 2040, but here sex is anything but outlawed, and the performers are very real!

Today Amber Lynn is shooting a scene with Keiran Lee. I’ll never tire of watching the events unfold on a well-run shoot. The equipment set up just so, the attention to detail — it all still fascinates me even after all these years.

Pretty Girl pictures used for promo and boxcovers are shot after the model is in makeup. Amber walks back through the room in heels au naturel after pretty girls by Alan. Follow @Stillsbyalan and check out his work at http://www.stillsbyalan.com

Steve: “This is a beautiful shoot house, I see you have an eye for detail the way you are setting things up.”

Keiran: “I’ve got the worst OCD you’ll ever see. I am so particular when it comes to wardrobe and everything — it has to be perfect. It has to be…. It’s all about Amber’s return. I’ve spent a lot of time with Brittany [Andrews] trying to make this happen, and it eventually did, and I’m very happy. She looks amazing!”

Recently Keiran has shot some of the legend-status girls who have made a come back, and asked Brittany Andrews for the introduction, and if it would be possible to shoot Amber.

Keiran: “There was a bit of back and forth and we managed to make it happen and here we are today!” 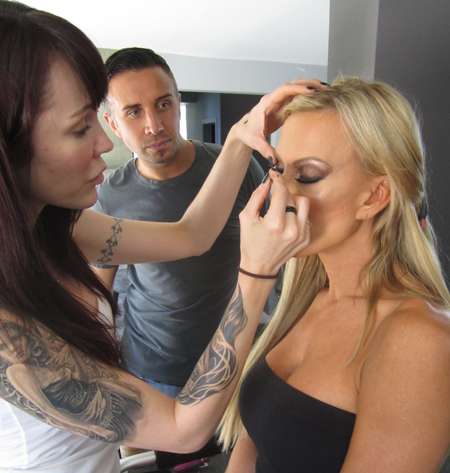 Now in the living room, they all have the script and are nailing down their lines. Keiran is going door to door getting votes. Amber owns a strip club. It’s not hard to seduce a politician when you look like Amber! They repeat their lines over several times, defining motivation, getting attitude and tone of voice, then again repeat lines without the script… this runs very smooth. Both Amber and Keiran are extremely professional, both get their lines down quickly and convincingly.

Cell phones off, they start to roll.

Take one is good but they do another take as well. Then second angle and close-ups. No wasted time, Francois knows exactly how to get what’s needed.

This is a good role for Amber – assertive and dominant. They get through the lines, the tease and just before the sex they break for stills. Today they are doing the hardcore stills before the scene. All but the popshot. With those out of the way, Keiran very considerately asks Amber before he goes for the pre-scene shower, “Which cologne do you prefer me to wear?” giving her a choice.

Keiran said he wants the sex as natural as possible, and it’s obvious he wants chemistry in this scene with Amber.

When the hardcore sex begins they really are getting into it. Francois moves the camera for the best angles, holds camera overhead, to the side, etcetera… there’s a beautiful pool outside of the glass doors in background which adds to the opulence of the scene.

Keiran and Amber are on the couch furiously fucking like wild animals. The intensity is astounding from an in-person perspective. Just as I’m wondering if it will be this intense when I watch it when it’s released, Keiran tosses Amber up and her head bumps the mike on the boom over them. Change angle — rolling — action!

At the end it’s missionary to popshot, Amber on her knees, her closing line, “Well, you got MY vote!” It was great seeing professionals make a superior product.

This was the first scene Amber did since “The Housewives of Amber Lane” by Wicked Pictures in 2008, which makes this an official come back to shooting for her.

Amber still holds a high standard of quality for her work. She’s very concerned about what her fans will get from her. She seemed very happy with her come-back shoot today. Pleased that her fans will be rewarded by the best performance she can give them. 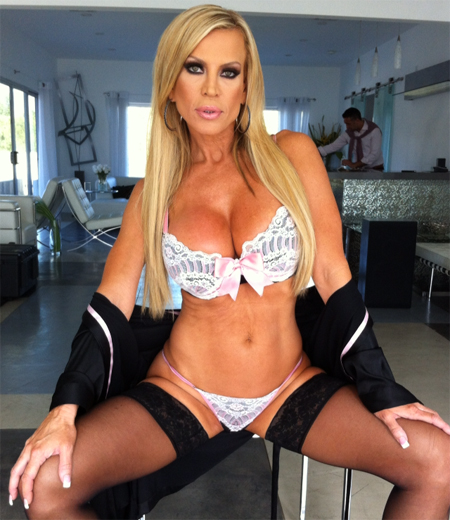 Speaking of preferences and the dos and don’ts each person has while filming sex Amber says, “That’s really one of the things I respected about Keiran, that he had that conversation with me before shooting. ‘What is it that you absolutely do not want to happen today, and what is it you would like to happen?’ he said. And that changed the whole course of the entire day. It was the short conversation we had before the scene so we had some idea about what not only was going to turn the performer off, but what was going to turn the performance on… it was really a treat!”

“Again, at the end of day Keiran was the hottest stud — part country gentleman, such a sweetheart, and a flippin’ hilarious guy which makes him a pleasure to be around on the set and most importantly when the robes come off he performs like a true hardcore champion!”

Amber Lynn fans have an amazing scene coming their way! She even looks better than before; Big full boobs, longer blonde hair, toned and tanned body, and that famous Amber Lynn appetite! To hear Amber, who has worked with John Holmes, Jamie Gillis, John Leslie and the other greats in adult film history, talk about a shoot like this would have been unbelievable if I hadn’t seen it myself. She was ecstatic with Keiran, the quality of the Brazzers set, Alan who shot the stills, Francois Clousot’s camerawork, and especially the makeup artist, Melissa, who she will rant about! Melissa is Amber’s new love! Everything went better than expected and she’s a happy girl!

The performers pre-agreed to a 48 hour actor exclusivity hold, and this scene was shot non-condom with CET (Cutting Edge Testing) the testing facility requested by both Amber and Keiran. Amber says, “I believe CET to handle testing with the upmost care and have the talent’s best interest in mind.” Her new website at AmberLynnXXX.com will be online soon.