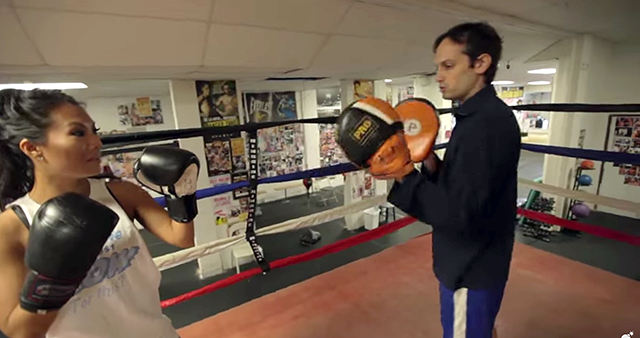 Asa Akira and The Hundreds are back again with a new hobby. This time Asa Akira takes to the ring and tries to test her strength and agility with boxing. This time she’s taking a different kind of shot to the face. The Hundreds take her to Korea town where she stops by KTown Boxing Club to be trained by Simon and see if she can take it in the ring. Enjoy as Asa Akira does Boxing!

Asa Akira admits that boxing isn’t normally the type of workout that she would want to do and she normally hates contact sports- except, you know… but it doesn’t hurt to try something just one time.

They go through what an entire training session would be like for a boxer. Starting out with quick leg workouts that will get her used to moving around the ring. Then she straps on some big gloves to duke it out with her trainer and learn the art of landing a uppercuts and jabs learning how she can take out her husband in the meantime.

After going through an entire training session, videographer Johnny challengers her to a fight and they head to the ring. The Chang Banger Johnny Chan versus The ASSassin Asa Akira. Will Asa Akira kick Johnny Chan’s ass? Can she take it on the chin? You’ll see her warm up to this hobby and start to really enjoy the beating that she’s taking near the end.

Is this not the Asa Akira that you like well you’ll get the same effect you’re used to by turning up the volume and closing your eyes while she swings at the bags and balls. Want more Asa Akira and The Hundreds doing hobbies then check out our other posts where she tries tattooing, taxidermy and crocheting.