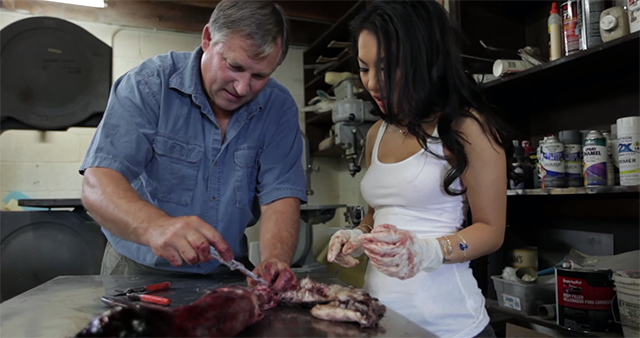 “Why get a real job, when I can just give a blow job”– Asa Akira

For this episode, She meets up with Gary, the owner of Bischoff’s Taxidermy in Burbank, California to see if stuffing dead animals instead of her famous tickle taco will be her new hobby.

This taxidermy shop has been around since 1922 and extremely is well known. They make props for a lot of Hollywood movies and sets with a proud display on their wall of work that they have done. Some of the movies and films that they have worked for include: The Cat in the Hat, Lizzie McGuire, True Blood, The Big Bang Theory and The Scorpion King. Don’t worry, no animals were stuffed in the making of our movies… with the exception of the cougars.

It may be your first instinct in a video with Asa Akira to skip to the “good parts” but this video is genuinely entertaining with Asa Akira balancing the girl next door with her dirty sense of humor and Gary never missing a beat and playing along.

They reconstruct a rabbit (the animal…not the sex toy) who was hit by a car while keeping up light conversation and this time she makes sure to use glove protection. Watch her bring Fluffy Mc Anusson from road kill to movie star before Asa Akira hops off to her next adventure!