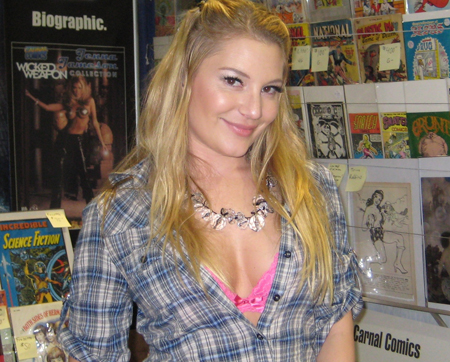 CARNAL COMICS – This year we have four new products to premiere at San Diego:

Demi the Demoness celebrates 20 Years in print by appearing in four new items from Carnal!
Sgt Pepper/Demi Parody Print:  “It was 20 years ago today, Demi the Demoness told the gang to play…”  These exclusive full-color prints created by SS Crompton & Randy Vogel are a painstaking recreation of the classic Sgt Pepper album cover, only all the characters in the picture have appeared in Demi comics and crossovers over the last 20 years.  Demi and her closest gal pals portray the Beatles in sexy versions of the Sgt Pepper uniforms.  This item is the exact size of an old style album cover and includes a back that looks like the back of the Sgt Pepper album as well.  Printed on acid free art paper by the Electric Works Gallery in San Francisco – makers of fine prints for over 20 years.  The prints retail for $50

Vampirooni #1:  Finally Vampirooni has her own solo comic!  The Story by Randy Vogel & Allen Angel has enemies from her past in ancient Egypt hunt her down and try to force her to repay a debt she doesn’t feel she owes.Plus she has to fight a hoard of Ninjas that just can’t seem to be killed!  Can she stop them before the sun comics up inn San Francisco? 32 pages Price $3.95 Cover and editing/lettering by SS Crompton

Pantheon of the Gods:  In this special  issue, Tara, Lord Ghede, Sekhmet and Tenh-Mer continue to gather allies and  try to convince the other gods that their realms face the gravest danger since they left Earth.  They also learn who and what is trying to wipe out the gods   The events in this issue lead directly into the first City of the Gods novel, making it a perfect place to start for new readers.  32 pages price $3.95

The Last Goddess #1 At Dunwich Asylum, two evil gods secretly attempt to rebuild their powers and gain new converts on Earth.  One remaining goddess of the light is reborn to try and thwart them, but is it already too late?  Can this naked, beautiful and confused woman rediscover her godhood and stop the coming of a reign of evil that would make Earth a living Hell?  Can she adapt to the modern world after being dead for over a thousand years? Gorgeous art throughout! (Demi also appears in this book)  48 pages – $6.00

Plus we’ll have the largest selection of adult comics that you can find at Comic Con!