NL- These questions were written quite a while ago, but Axel was very busy making movies. He just got a chance to send us the answers. 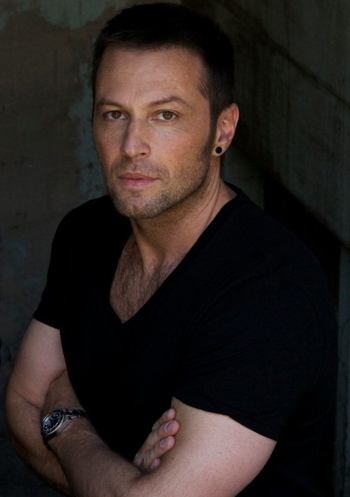 1 Can you tell us about your childhood in Italy? What are some of your best memories of this time?
I’m afraid the statute of limitations on some of my best childhood memories hasn’t expired yet…

2 How aware were you as a child of your father Lasse’s fight with the authorities throughout Europe in his attempt to legalize pornography?
I wasn’t even aware that Lasse was my biological father until the age of 14..but he told me all about it, and then some. He’s an international lawyer, and in the late 60’s, while he was based in Copenhagen and wanted by the authorities for obscenity, he came up with a very intricate legal defense strategy. Then he snitched on himself, won a much publicized case, and created a precedent. In 1969, Denmark became the first country in the world to legalize pornography.

3 What was it like working with your father and what lessons in filmmaking did you learn from him?
My father taught me more about filmmaking than film school ever did, both with his successes and his failures. The most important lesson I learned from him is how to work obsessively, barely sleep, and have no life. Thanks, dad.

5 What do you consider your proudest achievement?
Becoming the first (and still, to this day, the only) minor to request and obtain excommunication from the Catholic Church in Italy. I was 7 years old.

6 Have you seen the film Pimp? How does it feel to be portrayed as a fictionalized character in a film?
I was portrayed as a self-centered, egotistical megalomaniac with a God complex. Sadly, not much fictionalization there.

7 In January you won the AVN award for “Director of the Year” for the second consecutive time, and just two weeks ago you won Best Director at XRCO, again for the second year in a row. What was it like to receive those honors?
It’s always awesome to hear people tell you that you’re good, especially if you love what you do. But all my awards really belong to my incredible team: my fellow conspirator Eli Cross, my PM extraordinaire Shylar Cobi, my amazingly scary gaffer Shaun Rivera, and the rest of my precious crew that constantly keeps up with my elitist bullshit. Nonetheless, I shall hold on to the trophies.

8 You began like your father shooting on film. You shot your pivotal movie Compulsion in 35mm. What for you was the magic of film?
Back then you just couldn’t achieve a real cinematic look with video, and the story I wanted to tell with Compulsion was so personal that I had to tell it through prime lenses. But the real magic in that movie was Patrick Collins’ inspiring, infectious personality, his mentoring, and his emotional commitment to the project. And his fat wallet, too.

14 You make at least 60 films in a year across different genres. You’re a self confessed workaholic. What do you like to do to relax?
Nothing relaxes me more than buying ridiculously expensive cars, customizing them, getting tired of them after a few weeks, and selling them at a loss. Over and over again. That’s why I have to shoot 60 films a year…I have car ADD.