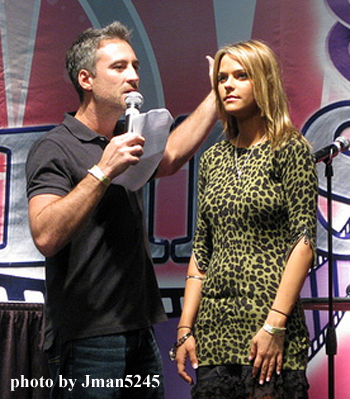 Photo is B Skow with his wife Meggan Mallone

Today’s K&C Show, and now the forum, are our first two time and places for our announcement of Skow joining GFF. A press release will go out to media outlets such as AVN and XBIZ on Monday. We wanted the GFF family to hear about it first.

Skow spent his last 19 years at Vivid and has definitely proved himself over countless projects, including various ‘feature’ films. Skow started his career with Vivid as a photographer (he’s done all their box covers over the past 19 years) and then started directing, as well.

We were at first cautious about hiring him as Vivid and GFF have different movie and casting styles. However, after meeting with him several times, we found that he is a very passionate filmmaker (like me, he’d be doing it even if there wasn’t a paycheck involved), are convinced that he understands the GFF vision and style, and – very importantly – will add a fresh perspective. He started shooting his first movie today, and it should be released around August or September. He will be doing between one and three girl/girl titles per month for us.

I will not be reducing my own shooting schedule…in fact, this has allowed me to start shooting two new series. I shot seven scenes this week along with packing and moving my personal residence of 15 years. So, no let-up for here! Also, talent such as India, Elexis and Madison Young will still have the opportunity to do projects for us.

There will be more in the July newsletter, of course.

Girlfriends Films is proud to announce the addition of acclaimed filmmaker B. Skow to its team.  B. Skow will direct existing Girlfriends Films lines, as well as new, high-end lesbian features.  B. Skow’s first projects include new volumes of bestselling series “Women Seeking Women,” “Lesbian PsychoDramas,” and “Net Skirts.”

“I’ve always been impressed with Girlfriends Films’ content, business practices, and industry involvement,” says B. Skow.  “After meeting Dan O’Connell, Moose, and the rest of the staff, I can see why the company has such a positive reputation.  I feel like I’ve found a new home.”

“I’m extremely excited to begin creating new volumes of Girlfriends Films’ awarded series, like ‘Women Seeking Women,’” continues B. Skow.  “It will be a fun challenge to stay true to the core of the series, which consumers love, while adding my own touches as a filmmaker.”

Quite familiar with awards himself, B. Skow has earned an impressively diverse number of nominations from AVN and XBIZ, including Best Director and Best Screenplay, as well as noms in categories including blockbuster features, amateur, gonzo, parodies, and vignettes.  AVN has presented B. Skow’s movies with awards for Best Three-Way Sex Scene, Best Celebrity Sex Tape, Best Pro-Am Series, and Best Pro-Am Release.

O’Connell continues, “After many meetings with B. Skow, Moose and I have come to whole-heartedly trust him to capture everything our fans love best about Girlfriends Films’ movies – his enthusiasm truly matches our own.  Even though B. Skow has come on, these movies are my passion, and I will be shooting my own movies at the same pace as in the past.”