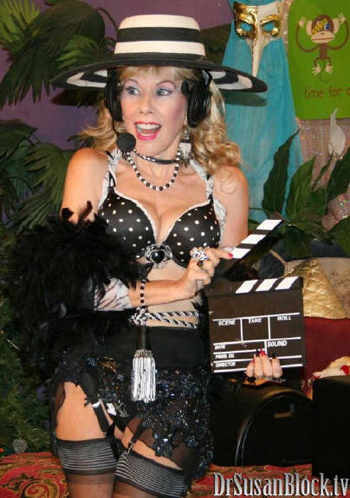 The Actor & The Exhibitionist
with John Barrymore, Elaina Raye, Gia Steel, Flash Brown & Lucky Starr
“From the bonobos to the Barrymores, acting and exhibitionism are often intertwined,” says Dr. Block.

September 26, 2012 – Los Angeles, California
Tune in or join us in-studio this Saturday night for a live broadcast of The Dr. Susan Block Show where we will explore the ins and outs of professional acting and personal exhibitionism on the silver screen, stage, mainstream media and adult entertainment.

Joining international sexologist Dr. Susan Block in her BonoboVille broadcast studios will be actor/coach John Barrymore, grandson of legendary actor John Barrymore and half-brother of Drew Barrymore, part of the distinguished Barrymore dynasty which is as close to Hollywood Royalty as a family can be. 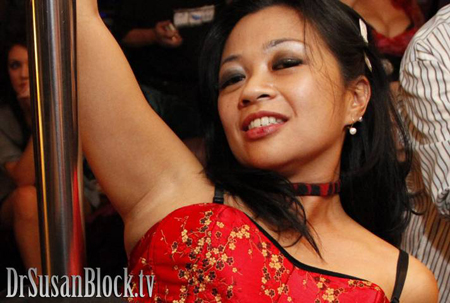 Also joining us will be XBIZ and UrbanX Best Male Newcomer Flash Brown and gamer/adult starlet Gia Steel. Returning to Bonoboville will be charming LukeIsBack journalist/adult performer Lucky Starr (last on DrSuzy.tv for Eros Day 2011) and pole-dancing angel Elaina Raye (last seem on DrSuzy.tv in  “Sex and the Republican Brain”).

Watch the LIVE BROADCAST & See All the Pix and Past Shows at http://DrSuzy.tv

To join our exclusive live in-studio audience and the after-party at Dr. Suzy’s Speakeasy in the Soul of Downtown LA, aka BonoboVille, call 213.670.0066 or go to http://tinyurl.com/DrSuzyRSVP

Proceeds from donations go to help save the highly endangered “make love not war” bonobos from extinction in the Congo and to promote the Bonobo Way of Peace through Pleasure around the world.  Dr. Block and guests will enjoy sex toys provided by Sybian, ScreamingO, Tenga, Stockroom, Kinky Eddie, JuxLeather and Condomania condoms, plus a fine art exhibit featuring Anthony Winn’s Stripperella artwork and the classical erotic paintings of Scott Siedman. The Dr. Susan Block Show beverages of choice is Absinthe and Agwa di Bolivia Coca Leaf Liqueur, among the many fine libations and gourmet hors d’oeuvres featured at the always-popular Speakeasy Open Bar and Aphrodisiac Buffet.