Has your sex life taken a complete 180 turn, heading straight to hell?

Chances are, you and your partner may be out of shape and that’s why you may feel doomed (temporarily).

Recent studies have shown, that couples that exercise together, fuck like rabid animals. There is no better cure for the sex blues, than exercising with your partner and putting those newly found muscles you never knew you had, to the test.

Have you ever seen a super hot babe at the gym, in tight yoga pants working out with someone that looks to be a buff trainer? You know the girl I’m talking about. She’s smiling, asking questions about posture, and he’s more than happy to oblige by placing one hand on her ass, and the other on her tits, while he instructs her to bend over facing the opposite way from the mirror, only so that he can not only be copping feels, but ass gaze at her reflection. The kicker is when his eyes wander he finds you, in the mirror at a weight bench lost in some fantasy too busy memorizing every last bit of that healthy ass of her’s to do your second set. On one hand, you are adding one more scene for a quick deposit to the spank bank in the showers. And on the other, after their workout, you know the two of them are heading out for a quick shot of wheat grass, and then back to her place to FUCK LIKE MINKS! 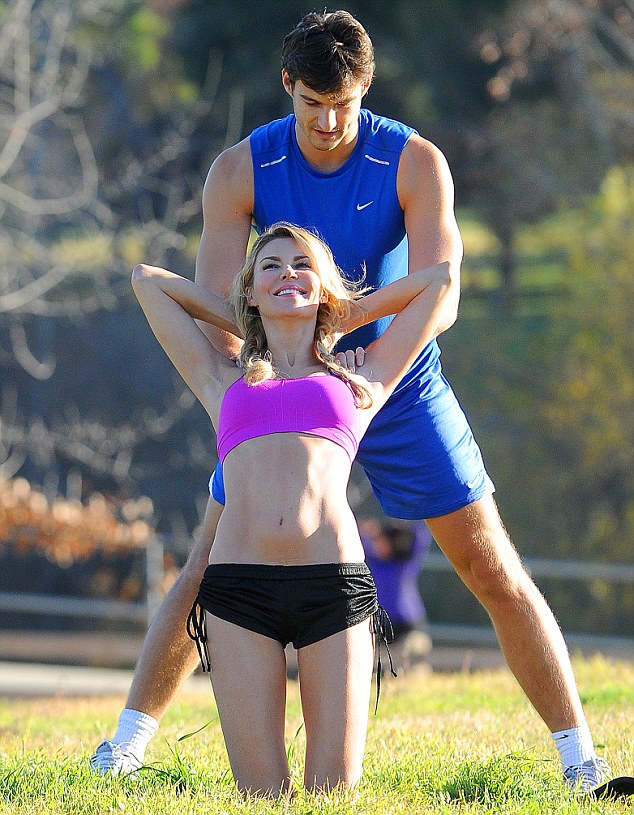 Let’s get away from all the things people already know…Like endorphins. Ok, hang on, quick recap on endorphins, and then we’re done with those fuckers. What are they?

They are the “feel good” hormone, that gets created and released by the central nervous system and pituitary gland. They’re brain chemicals that get released throughout the body when things seem to be going your way and feeling good is top priority. When you get that feeling all throughout your body and the tingling sensation set’s in, know that your endorphins are running as wild as fucking Hulkamania in the 80’s.

Ok, now that we got that out of the way, we can move on towards the real shit. What can make you a master fucker in the bedroom? Shit, it doesn’t even have to be in the bedroom. A master fucker can fuck anywhere. From the back of a Volkswagon, to the washing machine, to the island counter top in the kitchen, all the way to the ottoman in the living room. What makes a master fucker you ask? Being in shape. And not just lifting weights and looking buff. That is sooooo the 80’s. Being super buff, only makes you super rigid, and abnormally forceful. Basically your mobility will be stunted. This isn’t about the “jack hammer” or the “fuck her upside down trick.” This is all about, slithery movement, conditioning and most of all coordination. This will have you and your partner tied up and twisted into knots that will keep your sexual peaks escalated to extreme heights.

Here are some exercises that will help you become a world fucking champion in Master Fucking:

This is a complex definition, a master fucker can be many thing as the list that follows

Ok now that we have all the minor details out of the way, lets’ get on with it shall we?

Probably one of the most important stretches to do. Your pubic bone will strengthen, and however skinny, fat, boney, or soft your woman may be, your pelvic thrusts will create such an impact that it will be comparable to that of a head on collision on repeat.

Core, core, core… “The cage is soft!” Change that, to “my god how the fuck can you do that?” And you’ll have to answer, “because my core is stronger then bricks.” Simply put, in a situation where she wants you on top pounding away, with a strong core you will be able to hold that plank position for a while without having to dip down and show her your more feminin side.

Having upper body strength, for both male and female’s are going to help with the stability of multiple positions. It’s just a good idea to get your pushups in every morning, and evening, so that you are ready at any moment’s notice to fuck.

Stair climber, jogging, eliptical etc.. Let’s face it, if you can’t last for awhile and control the pace, you are not a Master Fucker. Master Fucking is the art of being able to control the fuck, and not have the fuck control you. Without cardio and a strong heart, you are nothing.

Moves are similar to sex. Master Yoga and you will earn your Master Fuck stripes in spades.
Maximize your glutes (butt), thighs/legs, hip flexors and core: This just goes without saying. The butt, thighs, hips, and core is where the power is generated under the sheets. Listen, you may have a woman that can literally shove anything up her ass, without a single flinch, and maybe she can split her pussy lips open wide enough to resemble the Batman logo, that’s fine and dandy… (Actually that’s fuckin’ amazing!) But without the two of you having proper muscles in the right areas of your bodies, you will not be able to reach the new levels and peaks within the allotted time frame. Picture this: You guys are getting ready to fuck, the phone rings, the person on the other line says they will be by in less than 10 minutes. Normal people would rip their clothes off, and lay on top of each other and fuck for less than two minutes. Blow a load into the sin cave, and then jump off, get ready and still have enough time to make a fucking coffee. What you want to be able to do is after minute 5, your thighs are just starting to warm up, a sweat bead falls of your nose, and into her eye, stinging the shit out of it, but you both smile, laugh it off, and continue the motion in the ocean. You lift her legs up in the air, slowly start to separate them so that they are further and further apart forming a deep “Y” formation, let out a primal scream and slowly thrust into her without having to adjust. Your butt, thighs, and hips will get a workout you couldn’t buy on T.V (even if they paid YOU)!

These are the movements you want to work on to power up your butt, thighs and hips: