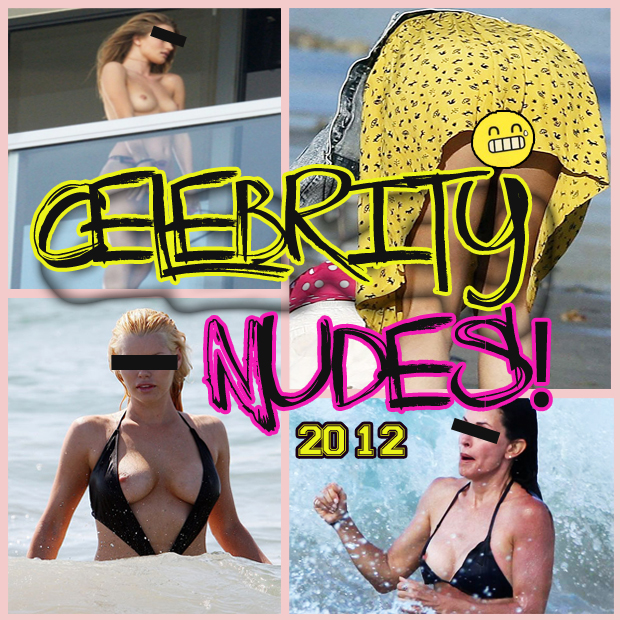 “Ali who?” She’s the 22-year-old hottie who starred in this year’s limp-dicked cash grab American Reunion. She plays a newly turned 18-year-old who Jim used to baby-sit. Naturally, she’s gunning to lose her virginity to him in the most aggressive manner possible. Will Jim be swayed by teen temptation? And break movie formula? Of course not.

Movies you might have seen her in: Alpha Dog, Pineapple Express, Zombieland, Drive Angry, The Rum Diary

Lovable as she is cute, Anna Faris finally flashes her perky tits in What’s Your Number. Damn, I wish I found a better picture out there instead of one that makes her look like the Creature from the Black Lagoon.

Here’s Jiggaman’s old lady showing off her wonderful boob and nip on the beach.

Remember this ultra-cute popstar from the late 90’s? If you don’t, shut up and continue on enjoying your youth.

This 32-year-old darkling will always be kooky-eyed Wednesday Addams to me. She continues her weird streak with a crappy chintzy sparrow tattoo on her tit…after breast-reduction surgery?!

Human sex doll, Coco Austin’s claim to fame is basically being Ice-T’s cock-warmer. Nobody brings the thickness like Coco. Oh, here’s a picture of her nonchalantly flashing her furry muff to snap-happy paparazzi. Even spunk-drunk porn-stars have more class.

Screw Jennifer Aniston. She’s a modern day youth-obsessed “Blood Countess” who sadistically loves to keep us wondering if she’ll ever really go topless. Guess what Jen? We don’t give a shit nearly as much as you think we do. The spell has been broken.

Which brings me to Courtney Cox, the way cooler, bustier, more human version of Aniston. Somewhere in California, dressed in his old cop uniform from Scream, David Arquette is rubbing it out blind to old “Friends” reruns.

There’s something to be said about Marilyn Manson – the 43-year-old shock rocker who’s managed to slay the following: Rose McGowan (my sun and stars), Dita Von Teese, and now Evan Rachel Wood not to mention probably the entire VampireFreaks female directory.

Hey, Heather Morris is from Glee and now you know what she looks like naked. The End.

The only Jennifer whose tits are worth seeing. It’s like I made a wish ten years ago and it’s finally coming true…one nip slip at a time. Hopefully she won’t let another ten years go by before flashing her glorious orbs of destruction.

Desperate to distance herself from god-awful afterbirth Twilight, Kristen Stewart has been edging towards real on-screen liberation – her very first topless scene! I’ll shut up while you scroll.

More of an oddity than titillation, here’s Madonna flashing her granny mammary to a bored crowd in France during one of her concerts. Retire already. Seriously. Call it quits. Relax and eat some Grape Nuts or something. What the fuck is that brownish doo-doo butter-like sludge running down her stomach? Hang it up, Lucky star. The milk went sour. And you look like a goddamn Halloween decoration.

To offset the horror of a geriatric, withered Madonna tit, I give you one of the hottest girls on planet earth, past, present and future.

Sarah Silverman is an acid-tongued comedienne who used to get with Jimmy Kimmel and you probably know Michelle Williams as a Dawson’s Creek alumni but also the mother to the daughter of the late Heath Ledger.

It’s like an IQ test…”Which of the following does not belong?”

I hate that this tramp even exists but I know her popularity trumps my own disgust, so here’s some Miley boobage for your eyes to snack on.

Yes, when in doubt, do the fucking Robot.

Once it’s seen, it cannot be unseen.

No one has as much nerd cred looking as hot as Olivia Munn. This Attack of the Show ex-host may have done the unforgivable and had sex with dumb-ass director Brett Ratner (X-Men 3, Rush Hour) but it’s all good precisely because of these hot leaked pics of her hot-ass fucking body.

The Hottest Picture Ever Taken

Christ on a cracker. At this point, if you don’t know that creepy paparazzi are gonna do anything to get the shot up your fucking skirt via beach periscope, you may want to watch where you bend over.

I have to include this. I don’t want to but it’s more of a duty thing. Equal opportunity and all that. Here you go, my droogies, I present thee with Snooki’s rancid pussy.

Leading the charge of the next generation of daddy-hating, racoon-eyed goth songstresses is Taylor Momsen. Two parts heroin chic and pressurized teen angst, Taylor makes her pop peers and even punk-lite crooner, Avril Lavigne look like dead-eyed automatons off an Old Navy commercial.

Failed Britney clone, Willa Ford made it out of the incubation stage but faded into total obscurity when set out into the wilderness that was the 90’s pop scene. So, naturally, her next logical step was to cash in on her topless scene in a straight-to-DVD-that-nobody will watch-because-googling-images-exists “Impulse.”

Here, I’ll save you five seconds: