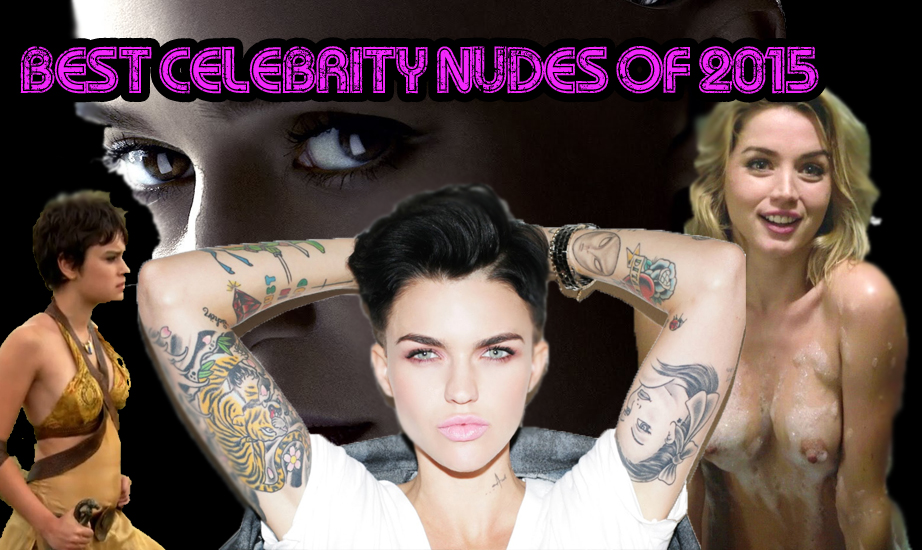 Happy new year! While we roll into 2016, let’s pause and give salute to the many awesome celebrity nude scenes of 2015! For my list, I’ve culled the best topless and nude appearances by today’s hottest and sexiest actresses. Whether it’s television or movies, no Hollywood actress is safe from my definitive list! Here is the hottest, uncut reel of female actresses showing off their naughty bits!

Welcome to Part 1 of 2015’s Best Celebrity Movie and T.V Nude Scenes! Come back next week for Part 2!

Without a fucking doubt, the year of 2015 belonged to amazingly beautiful Aussie talent, Ruby Rose! Her popularity soared like a hot air balloon powered by rocket fuel with no ballast. Rose’s “Stella” character on Netflix’s outrageously popular series, “Orange is the New Black” inadvertently caused millions of women to question their sexuality with her trademark ultra-sexy androgynous look. Looking at her face now, I actually sort of wish I was this beautiful. And this is coming from a guy!

Lucky for us, Ruby wasn’t shy at all about getting topless! Check out these sexy nude pictures of Ruby!

What originated as awful “Twilight” fan fiction soon devolved into this pile of henshit of a movie. Preying on the unfulfilled BDSM-lite fantasies of soccer moms everywhere, that still didn’t stop “50 Shades of Grey” from cashing in big-time at the box-office. Funny story: many theater employees were horrified to discover various dick-shaped vegetables and sex toys tucked in between rows of chairs after the first premiere!

“50 Shades of Grey” featured Dakota Johnson as the naive, sexually inexperienced soon-to-be sex submissive at the hands of titular deviant fuck, Christian Grey. Here’s what her tits look like!

Foul-mouthed provocateur comedienne, Sarah Silverman, despite her smoldering good looks, is one of the most offensive practitioners of her craft and I love her for it. Ever since turning 40, she’s sort of sending this “Oh, fuck it” vibe by appearing fully nude in her recent movies. Her latest, “I Smile Back” follows this new, alluring don’t-give-a-fuck attitude! Enjoy her supple tits!

One of the best hard sci-fi films in recent memory, “Ex Machina” is low on effects and high on making you think. Oscar Issac, of Star Wars fame, plays an inventor who creates the most life-like android and needs an outside party to determine if “her” artificial intelligence is indeed indistinguishable from a real human personality. Basically, it’s the ultimate Turing test.

Isaac’s android is played by fetching 27-year-old female actress, Alicia Vikander! She was actually naked throughout the entire movie and digitally edited in post-production to give her that metal exoskeleton look you see above! Here’s what she looks like with skin!

Holy mother of god. There’s hot and then there’s this special level of searing attractiveness only reserved for women like Madalina Diana Ghenea, and that’s exotic European hot! And Hollywood’s elite totally knows! Rumors of her banging Leonardo DiCaprio, Michael Fassbender and Gerald Butler are abound and totally true. She was featured alongside aging fuddy duddies, Harvey Keitel and My Cocaine…er Michael Caine, I mean! Here’s a scene from the film where she plays Miss Universe while Keitel and Caine ogle her from their hot tub.

Taking her lead from Sarah Silverman, Kristen Wiig is also saying “Fuck it!” and going totally full frontal nude! In her latest movie, which appears like one of those indie movies about a disillusioned woman having a quarter life crisis, Kristen shockingly drops trou and wanders around a casino completely fucking naked. And it’s not bad! Like at all. See for yourself!

Dope was a smash indie hit that kinda flew under the radar of films to watch in 2015. It pays awesome homage to old school rap and the story is fresh and moves at quick, comical pace led by its charismatic young actors. This is also the movie where gorgeous actress, Chanel Iman finally shows her tits! I’ve placed three pics of her in varying levels of undress. If you scroll up and down fast enough, it’s like a ghetto-ass flip book!

I don’t know what the hell this movie, “Bare” is about except that it involves “Glee” alumni, Dianna Agron and a lesbian love interest. Dianna Agron has stayed away from going topless, until now! You know how certain actresses will only get nude if the scene is shot tastefully? Well, this is exactly that! Glee tits, go!

Ah, “Game of Thrones.” Skip this next jumble of words if you’re not an avid fan of the smash hit HBO television series because it won’t make any sense and the nerdspeak will probably deter you from watching it anyway. So Rosabell Laurenti Sellers (pictured above) plays “Tyene Sand” – the third of eight bastard daughters fathered by Dorne Prince Oberyn Martell. Known as one of the “sand snakes”, she prefers using long daggers and knives in battle and holds one helluva grudge against pretty white girl, Myrcella Baratheon. And I’ll just stop there. This young actress has a pair of tits to die for!

Come back next week to see my Best Nude Celebrity Movie and T.V Scenes of 2015 – Part 2!