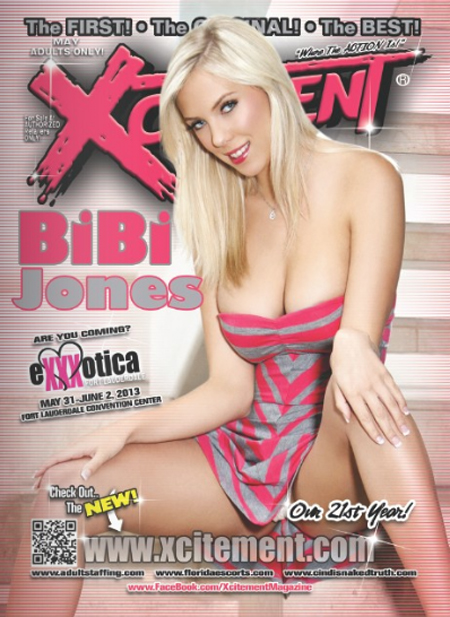 You are in New York City right?
Yes, after the interview, I am going to take a shower and get ready and go shopping for a couple costumes for tonight. Shopping in New York is amazing. So I will go out and than come back and take a nap.
How was your show last night?
It was awesome. It was my first show in a year. I was really, really nervous. I didn’t know how it was going to be.  But once I got up on stage it was like I never stopped performing. I have fans that go to every one of my performances. They are there. They were at every one of my performances last year.  It doesn’t matter if they have to fly or drive. And they were there last night and it made me feel so good!
Those are loyal fans. What’s the best thing about feature dancing?
Before I did porn I danced. Growing up I did ballet for thirteen years. I love being an entertainer. I love being on stage and dancing, no matter what kind of dancing it is. Honestly, giving the lap dances, because usually when I have sex I like to be dominated. So the guys dominate me. But for some reason whenever I do lap dances, I like to be dominant. So I like that.
You are totally in charge when you are doing a lap dance. Can they even touch you?
Yeah, ya know I let guys touch. When you are getting a lap dance, that’s probably over-priced.
Not from you it’s not!
As long as there’s not any foul play going on, I’ll let them touch my boobs or kiss my neck. I make it very sensual and sexy.
How much does a lap dance cost?
A hundred per song.
I’d pay a hundred dollars to touch your boobs. I think most anyone would. You are pretty gorgeous!
Ah, thank you!

So what did you do for the last year, if you weren’t feature dancing?
I got into the wrong crowd and into the wrong things. I needed to take a step back and figure out what the hell I was doing. It was not who I am. I quit what I was doing.  I ended a lot of friendships. I got a normal job doing marketing and sales. I had a normal life. I made some new friends and figured out what I really wanted in life and love. And I decided to go back to porn. It’s what makes me happiest!
And we are glad you did! I notice there is a sexy picture on your Twitter of you standing next to an ambulance. So you made a new movie?
Yeah, I made like six movies since I’ve been back.
Wow! What is the ambulance movie about?
That is a gonzo. You know how Digital always does features. So now Digital Playground is doing one gonzo a month. And it was my turn to do it. They trade out the girls. So I was a paramedic. I had some cheesy pick-up lines. It was cool.
Did you get to have sex with people in uniforms?
I was the one in the uniform.
So you had sex with people who needed you to fix them when they were hurt!
Yeah. I worked with Xander Corvus and Eric Everhard.

Sounds fun. I took a quote off your twitter that you posted. It said “Let’s try having sex before we rush into dating.” I like that. Do you do that often? Are guys that lucky?
Yeah! I am actually just having sex with one guy right now, which is very rare for me. Usually not one guy can satisfy me. This guy is really incredible. I don’t know what it is. He gets me off like six, seven times every sex session and that never happens. I told him I really like having you around. I never get off this much. He satisfies me so much I don’t need to go look for other dick.
Your fans are going to be disappointed. They wanted me to ask you if you are still picking up guys on the street and do you have sex with your fans.
Tell them yes I do.

Most of the rest of the questions I have for you are from your fans. I asked for help writing my interview for you and I got a lot of questions that they wanted me to ask you. One guy wanted me to ask you what kinds of books you like to read, so I will make that the first fan question. What kind of books do you like to read?
My favorite book is one I read in high school and was made into a movie last year. It’s called The Perks of Being a Wallflower.
I love that book. I don’t know how many times I read that book. Usually when it’s made into a movie, you get disappointed because it’s not as good as the book. But it was just as good. It was amazing.
You related to that book?
Yes I did.
You were a wallflower?
I didn’t have to wear a bra until the end of my junior year in high school. I had acne all over my face. I didn’t get asked to prom. I just wasn’t attractive.
Guys right now are having a fit. What do people you knew in high school say now?
Those guys are always wanting to take me out now. I’m like you were so mean to me. Fuck you!

Next fan question. Would you marry a zombie?
No. I don’t think Zombies can have hard cocks.
Yes if it got hard it would break off. Do you watch those zombie movies?
No, I don’t really like sci-fi.
What do you like to watch?
I like true stories and movies that make you think. Those sci-fi movies are so over the top and obnoxious.

Do you like that band, One Direction?
When I am goofing around with my friends and it is playing in a store, I will dance around. I am very goofy. To make people laugh? Yes I will dance to them. Do I listen to them for fun? Do I have them on my Ipod? Fuck no.

But at least you knew who they were. I had to look them up. It’s an Aussie boy band that I never heard of. These are all fan questions so I don’t want to be blamed. (Laughs) Why does Dan Uggla suck? Do you know who he is?
Yeah. I dated him for a little bit.
Oh God, I didn’t know that. I know you like sports so I thought maybe you didn’t like the Atlanta Braves!
Yeah, back when I was eighteen and he never told me he was married. He told me he was divorced. Than while I was dating him, I found out he was still married.
Did you ever hear if his wife found out? Or what she said?
I’m sure she knew. It was all over the news.

Wow. I do remember hearing that you dated a lot of sports people.
Yeah, I love sports.
What is your favorite one?
Baseball.
Me too! I don’t know a whole bunch about sports, but I like baseball the best. What one sports guy who you didn’t date, would you like to?
Brett Gardner. He is the left outfielder for the Yankees.
And you’ve never met him?
No. I’ve been wanting to for four years now. I’ve said it on Howard Stern. I’ve said I want to fuck him in every interview. He has to have heard about it.
So should we send him a copy of this magazine when it comes out and have you autograph the front with your phone number and say please call me.
He’s married and his kids.
Oh, well maybe he is a good guy who actually loves his wife and respects his family. Unlike a lot of others.
Yeah, maybe he is.

Do you want to get married and have kids?
I’d love to get married someday. I can go either way with having kids. It depends on what my spouse wants. I can be happy with having kids or not having kids. I’d like to settle down one day.
Do you see yourself in a nice house in Oklahoma..
Definitely in Oklahoma. I like Arizona too, but I’d want a place in Oklahoma.
So you can stay home and cook and clean?
I don’t know about cooking and cleaning. I’d want to go out and do things. I’d want to have a part time job at least. I couldn’t be stuck in the house all day.

Do you have a fan club?
No, not that I know of.
Do you have an address for fan mail?
No. I don’t have one. I had a bad stalker problem. And that really freaked me out. This guy attempted murder and rape on a girl and he was stalking me.
Oh my god! That’s really scary!
It was a really bad situation less then a year ago.
Did he get arrested for that girl?
Yes he did. But I had gone to the police about it and they were taking me seriously, they kept asking me what I did (for a living) and I didn’t want to tell them, but they kept asking me so I did, and when I told them I did porn and then they didn’t take me serious any more at all. So a month later he did that to that girl. So if they had listened about him stalking me maybe it wouldn’t have happened to that girl. It was an ugly situation.
So did he go to jail?
Yes he’s in jail now.
I don’t blame you. You should have a bodyguard.
I do have a bodyguard on the road.

Okay, this is a question that I hope doesn’t get me in trouble, because I know it has to do with a sports guy, but I’m not sure what it means. It says ask Bibi about being “Gronk Slammed”
That’s Gronkowski, another ex of mine. I legally can’t answer questions about Gronk.
Good answer. What does it smell like? I wrote back to the guy and said what is IT and he didn’t answer me.
My pussy? It’s sweet. Like candy.

When are you going to do anal? A lot of guys wanted to know that.
Hopefully sometime by the end of the year.
Are you practicing?
Yes I am.
Lucky guy. I was also told that you were the best guest ever on Howard Stern. When are you going back on?
I wish I could go back.
Do you love Howard Stern.
I do. It was an awesome experience. It was the most watched show of the year. Then he brought me on a second time and I woke up and my voice was gone, so I think that ruined my shot on the show.
I think if all these guys are asking me about it, there are thousands of people out there who want you to go back on. Maybe we should start an email campaign to get you back on there.
Yeah.

How do you pick lucky guys that get to have sex with you? How do they get you to say yes?
It’s not that hard. Don’t be obnoxious or weird.
So are you saying your easy?
Yes.

Sounds hot! What’s coming up for you?
I’ll be dancing all over and I have new movies coming out. Check DigitalPlayground.com for my schedule.
Do you have a message for your fans?
I love you guys!