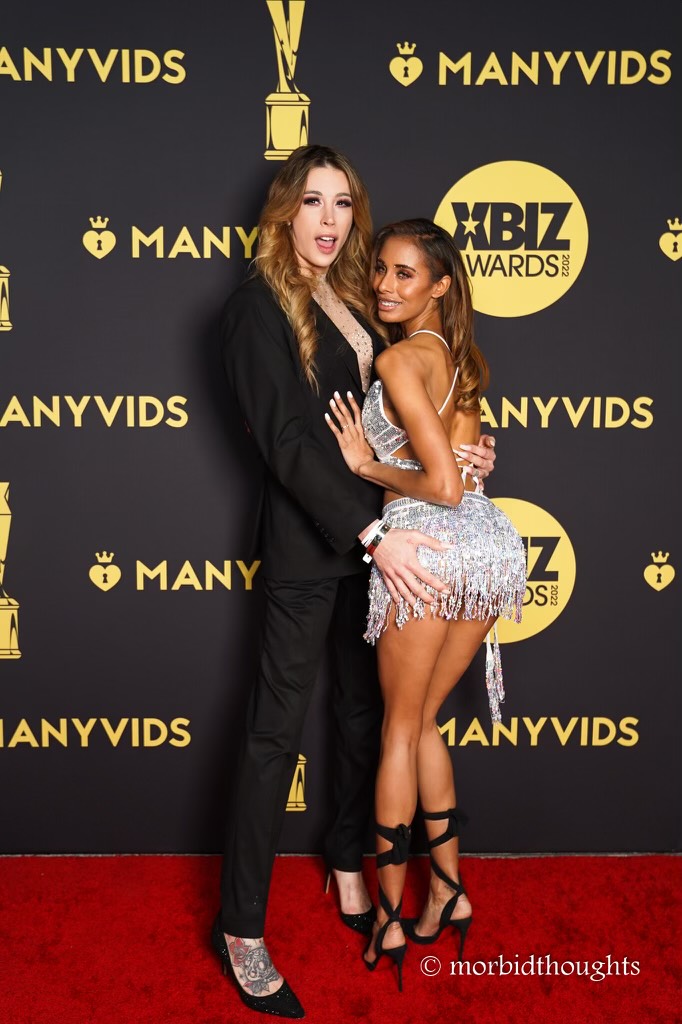 LAS VEGAS, NV – Adult performer Casey Kisses celebrated her recent win as XBIZ’s coveted ‘Trans Performer of the Year’ by proposing to her girlfriend and fellow performer, Kylie Le Beau, on stage during the awards ceremony earlier this month in Hollywood.

“It was such an amazing show and an amazing night for Kylie and me,” said Kisses.  “I was planning on the proposal for a few months. Once I found out it was a live show and that I had been nominated, I thought ‘this might be a perfect chance for me to propose to Kylie.’ I’ve been wanting to do it for a while now. I knew she was going to be dressed up looking perfect and if I got a chance to go on stage, all eyes would be on us. I was really hoping to win to get a chance to pull it off.”

The emotional moment was captured live on camera with the audience roaring into applause.

Kisses continued, “I kept thinking to myself, I might stumble on my words and kept hoping she wouldn’t feel the ring in my pocket. I say next to performer Jesse Lee and I got my phone ready for when ‘Trans Performer of the Year’ was going to be announced. I told Jesse, ‘please record if I win.’ Kylie kept saying she didn’t want to go on stage but I kept telling her I needed her with me and I prepared a speech with her in it. Once heard my name, I opened my phone, handed it to Jesse, and grabbed Kylie’s hand. It was one of the coolest things I’ve ever done. My thoughts and words came out perfectly. I almost cried when I pulled out the ring. I knew she would say yes. It was one of the most memorable nights in my entire life and I really want to thank XBIZ for the amazing opportunities they’ve given me.”

In addition to winning Trans Performer of the Year, Kisses won Best Sex Scene (Trans) for her scene with McKenzie Lee for “TS Love Stories 6” from TransSensual.

Casey Kisses debuted in the adult industry in 2016 with Grooby Productions and since then has appeared in numerous scenes and DVDs for every major trans adult studio. In addition to her work as a performer, Kisses cultivated a loyal following on cam platforms, Chaturbate and Streamate.

2021 has been a milestone year for Kisses’ rocketing career. She recently starred in the hotly anticipated, Casey: A True Story, produced by Adult Time. The feature film, directed by Joanna Angel, depicts Kisses’ real-life story discovering her identity. She also won the AVN ‘Favorite Trans Cam Star’ Award and XBIZ ‘Trans Performer of the Year’ Award.

For more of Casey Kisses, visit IWantCasey.com and visit her official ManyVids store. You can also follow her on social media on Twitter and Instagram @CaseyKissesxoxo.