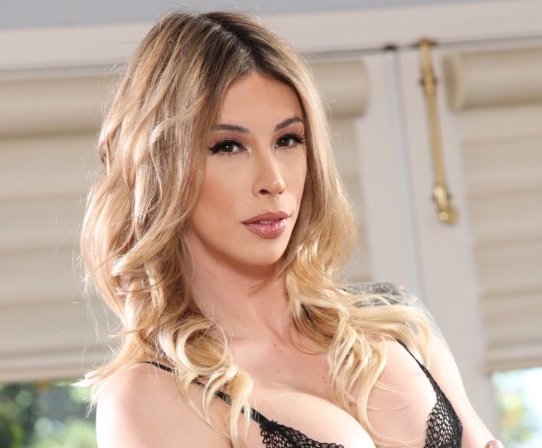 “First of all, I just want to say wow! Winning trans performer of the year caught me so off guard,” said Kisses. “I’m normally super nervous at award shows but I was so caught up in all the fun, I was shocked when I heard they were announcing Trans Performer of the Year. To be honest, the second I heard my name called I started tearing up. It has been my DREAM to win an XBIZ Award and this wasn’t just any award it was the award for Trans performer of the Year.”

Kisses has been nominated in the past at the XBIZ Awards in multiple categories. She also took home the ‘Best Trans Cam Model’ Award at the XBIZ Cam Awards in 2020.

Kisses continued, “I tried to make my speech short and sweet to leave time for other models, but now that I can, I’d really like to thank a few people who come to mind. I really wanted to thank Bree Mills, Radius Dark, Joey Silvera, Jim Powers, Tom Moore, Ricky Greenwood, Lance Hart, Christian XXX, and all of the directors and producers who have provided me countless opportunities to get better and better over the years. I would like to thank all of my hot and sexy co-stars who’ve appeared alongside me in my scenes, I consider so many of you close friends. I’d like to thank my fans for supporting me. This would not be POSSIBLE without you. My publisher and friend, Kristel Penn, she has been one of my biggest supporters throughout all of these years.

“I’d like to thank Chaturbate for providing the platform I got recognized on. It’s been life-changing and a huge part of how I got here today. ALL of the members over at XBIZ for putting the show together, it seriously has brought me so many valuable connections and has taught me a wealth of information about our industry. Even through the craziness of the pandemic, you all pulled it off!! It was amazing, thank you! And lastly I’d like to thank my girlfriend, Kylie Le Beau. She’s my editor, my co-star, my shoulder to rest on, my best friend, and most of all, the love of my life. I love you, baby. 2021 is our year. Let’s get it!”

Casey Kisses debuted in the adult industry in 2016 with Grooby Productions and since then has appeared in numerous scenes and DVDs for every major trans adult studio. In addition to her work as a performer, Kisses cultivated a loyal following on cam platforms, Chaturbate and Streamate.

In 2017, Kisses co-won the TEA ‘Stroker of the Year’ Award with Korra Del Rio. She was awarded the 2018 ‘Top Trans Cam Model’ at the Adult Webcam Awards and scooped up the 2018 ‘TEA Cam Performer of the Year’ Award alongside Korra Del Rio. In 2019, Kisses was nominated at the AVN and XBIZ Awards, then won the coveted ‘Best Solo Performer’ Award at the TEAs later that year.

2020 represented  a milestone year for Kisses. She took home the TEA for ‘Best Solo Performer’ and ‘Cam Performer of the Year.’ It was the second year in the row Kisses was awarded ‘Best Solo Performer.’ In 2020, she also won  XBIZ’s ‘Best Trans Cam Model’ Award and has been a panelist at multiple educational workshops during the XBIZ Shows.

For more of Casey Kisses, visit IWantCasey.com and visit her official ManyVids store. You can also follow her on social media on Twitter and Instagram @CaseyKissesxoxo.