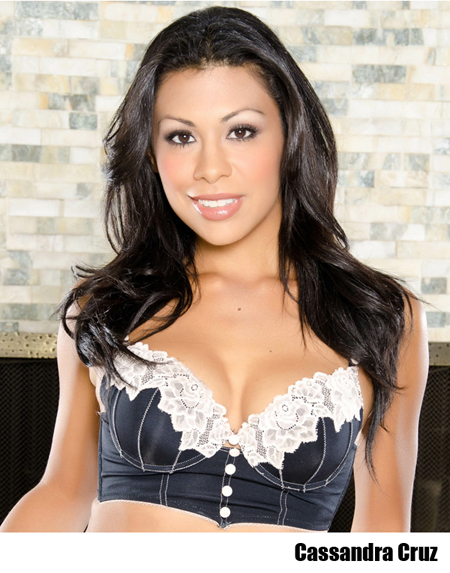 (Hollywood, CA ) Cassandra Cruz is among the most beautiful Latina women ever to appear in an adult movie but her real life story blows away any script she might be starring in.  Now the twenty-something Ecuadorian/Peruvian/American with a New York City upbringing looks back on her life as if it were an action-adventure film but all indications are that she’s saved her best work for now.

“I did my very first DP recently and I really enjoyed it and it sort of opened my eyes that I might want to do that more often because it felt really good. Plus I really want to get gangbanged.”

“Even though I never mentioned it, Disney didn’t think it was cool that I loved having sex and making dirty movies so they fired me from their marketing department,”  Cruz reflected.

“Plus I was going through a breakup which ended up on TV’s Divorce Court and also on the show Intervention when I wanted to get my husband help so he could get sober.”

“I told you my life has been like a movie but all that is behind me now and I’m, single,” Cruz said looking every bit the part of a healthy California superstar.

The brunette beauty with the toned body has never looked better mostly because of her physical fitness regimen that includes a daily five mile run and a strict diet of healthy fruits and vegetables.

“People are telling me this is the best I’ve ever looked and that makes me really happy because I work hard at it plus I really love performing in movies now much more than ever before because I can truly let myself go and really enjoy the sex,” Cruz rejoiced.

Make no mistake; Disney’s loss is porn’s gain and Cassandra Cruz is gorgeous and ready for action.

Cassandra Cruz can be see online at www.cassandracruz.cammodels.com and also reached via Twitter @TheCassandraXXX