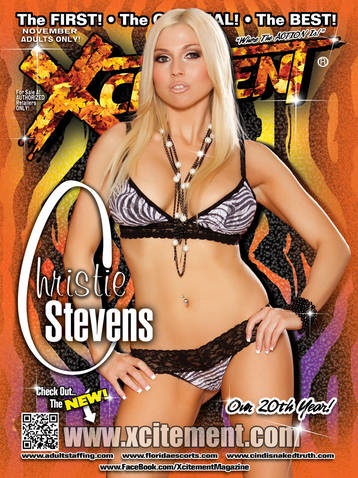 Hi Christie! Nice to talk to you. I saw you tweet about working tonight.  So I’m guessing you were busy for the last three hours doing cam shows. How was it?
It was good, fun. I talked to some fans and made some new fans. I masturbated a lot.
I’m intrigued by web cam shows. I think it’s a really cool way for fans to interact with you. It’s almost like they get to direct you in a movie.
It is cool. They can make requests and we can chat and get naked.
And you can see them too right? If they want you too.
Yes. It’s called cam to cam where they can turn on their web cam. But they don’t have to do that if they don’t want to.
But I bet a lot of guys want to watch you, but they also like you to watch them.
Yes, they do.

I heard that you are a good actress and that you should be doing feature roles in movies because you are good at dialog.
Oh, thank you. I take acting classes, so I am working on it.
Being a porn star has a lot of versatility. If you come in with the right attitude and skill set, it’s a pretty good job.
Yeah it is. I love it so far.
Okay, let’s go back to the beginning. Where were you born and raised?
I was born in Orange County in California. I grew up in Temecula. I went to high school in Temecula.

What were you like in high school?
I was kind of shy. I was kind of a nerd actually and I was a late bloomer. So I got really good grades. I focused on school until my senior year. My senior year after I got accepted to college, I came out of my shell a little bit and partied just a little.
Did you have any jobs during high school, like working at fast food or anything?
Yeah, I did dance growing up so I was a dance teacher at a studio and I taught ballet and that kind of stuff. Also I worked at Hollister, the clothing store.
And then you went to college, and what did you get your degree in?
A bachelor of science in Mass Communications with an emphasis in public relations.
Oh, so you’ve got the right job now, don’t you! That’s why you are so good at promoting yourself!
Yeah, I do. I am mass communication! (Laughs)
You are even using that body language.
Yep, it is internationally recognized! (Laughs)
Your teachers should go back and retroactively give you straight “A”s.
I know!

Do you still hang out with anyone from high school or college? And are they shocked by what you are doing now?
Not anyone from high school. There are one or two from college and no they are not really shocked. That was my personality. I’m really sexual. I was a dancer at a Gentlemen’s club while I was in college so I guess my job now is a natural progression.
How did you go from shy high school girl to college stripper?
I don’t even know. I guess all that sexual energy I had had been repressed inside of me. After I got good grades and got into college, I just let it all out.
Did your high school friends get the benefits of your horniness or did you wait until you were out of that school?
A couple did. Mostly it went on in college.
So in college you turned into the sexual person and let it all out.
I did.
And slept with guys and girls?
Yes. I did actually.
Isn’t college wonderful?
It is. That whole story people tell about their college roommate…, well, we really did get it on. She was hot. It was my freshmen year in the dorms.
How nice. Sex whenever you want it.
It was convenient.

And who was your first scene with?
My first scene was with Justin Magnum.
With that name I would imagine he had a really big cock.
He was big, yes.
What were you thinking, doing your first scene with a guy with a big dick?
Well I was a little nervous, but I’ve had big dicks before. Basically I was really excited to do it. They whole time they were asking if I was okay and I was like, yes, I am fine! So they told me I was a natural.
What company was it?
It was for a small website, something like Horny Birds.
What month was that?
The end of last year.
So December, 2011 is when you started. And now you are not in a year and already have a big agency (LaDirectModels.com) and a publicity firm. (RisingStarPR.com)
I started out with a different agent, and that agent was great but not the right fit for me, so every time I was on set people would ask me are you with L.A. Direct? And I would say no, and they would say oh, you look like an L.A. Direct girl. And so finally I thought I should go talk to them. I heard good things about them and Derek (the owner) so I went to see him and we decided to work together. As far as a publicist, a friend, Melina Mason signed on with them and had a lot of good things to say about them and gave me Devon’s (the owner) phone number. So I met with Devon and got signed on with them.

What does your ideal guy look like?
Kind of tall, toned and muscular, but not steroid muscles. I like a guy in a suit. Dark hair, blue or green eyes. No facial hair.
You know what you want!
And a big cock! Can’t forget the most important thing.
What does a hot girl look like to you?
I like so many different kinds of girls. I like blondes, brunettes. I like petite girls because I’m petite. Little tits and a nice ass. I like long hair. Just cute, with a cute personality.

Do you think you are submissive or dominant?
I think I am both. It just depends on the situation and the person. I’ve done both in the industry. I love when I get to dominate, but I also like to be dominated. I have to really respect someone to let them dominate me.
I saw some pictures you posted on your twitter account from when you shot a bunch from Brazzers.
Oh, yeah. It was three different shoots I did for them.
You looked adorable in all of them, but I liked the one where you were dressed up like Swiss Miss and they had a table full of sausages behind you. What was that? It was an Oktoberfest theme, called Octoberfuck. I was a Bavarian Barmaid.

Did you eat sausage in that movie?
I did not. I mean I ate man sausage, but not the food sausage. (Laughs)
You are funny. I’d love to see you in a parody movie. I love those. I want to introduce you to a friend of mine, Will Ryder, who does a lot of the parody movies.
That would be great!
We’ll talk more about that on twitter.
Thank you I would love that.
I saw you were doing Pornstar cam house. Is that the same as the cam shows that we talked about?
Yeah, it’s a web cam show. But the way they do it is to hire actors who get paid as if it were a shoot.

What are the best and worst things about being in porn?
The best thing is I get to fuck for a living. I think that’s a dream job. If everyone could just have sex and get paid for it, everyone would do it, wouldn’t they? The worst thing about porn? I haven’t really found a worst thing yet. I guess just having a sore pussy. (Laughs)
Good answer! Are you doing a lot of feature dancing?
No not yet. I just did my first feature dancing show about a month ago at the Spearmint Rhino, but I haven’t done anything else yet. I’ve been focused on getting movies out before I really try to make it in feature dancing. I do love doing it though. I love getting dressed up and developing the themes for my shows, and getting in costumes. I like getting to be there with the crowd and the people watching me. I love to dance and I love music. I have great stage presence because I have been dancing my whole life. I really love the social aspect of featuring also. I love meeting everyone, and that they meet me in person.
What’s really fun about watching your feature shows?
I do giveaways. I play games.
Motorboating is always popular.
Yes, that too. (Laughs)

?I don’t think that is what I would want as a caption under my name, but good for her! What is the best sex you have ever had?
I have a lot of great sex. Off camera, I’ve had some great threesomes with an ex-boyfriend. On camera, the most recent was the scene I just shot for Brazzers with Jacky Joy and Johnny Sins, that was really good sex.
Okay, fan question time! Would you marry a zombie?
No, I tend to go for the living.
(Laughs) I don’t think a cock on a zombie would be able to get hard.
Right, no blood.