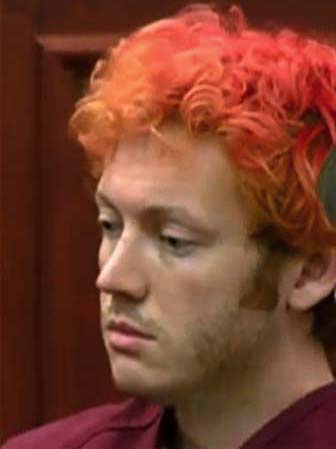 Crazy as in his psychiatrist at the college he was attending feared that he would hurt others. This was in June. She called a meeting of the schools mental resources team to do an evaluation. Problem was that by the time the team could get together to talk about it, Jimbo was already dropping out of college. Team says since they had no control of him after that, they didn’t do anything about it. Seems like a call to the police would have been a good idea, but maybe they were bound by HIPPA to not discuss him. Anyway, psychiatrist was right to be concerned. I wonder how she feels now that twelve people are dead? She has to have remorse and guilt for not doing more.

Jimbo has been charged with 24 counts of first degree murder and is facing the death penalty. I’d really like to know what he was thinking, why he did it, and what he hoped to accomplish. After we find that out, if I was the judge, then they can kill him, while all the victim’s families watch, and/or participate.