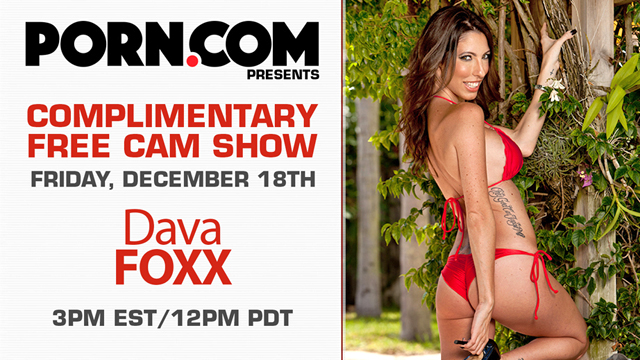 Dava Foxx is back for another FREE webcam show!

Let me tell you a little story about how Dava Foxx fell into porn. After turning 18-years-old, Dava enrolled in *gasp* college at the University of Central Florida. Whoa, I might have actually rubbed shoulders with her on my way to film class! After *gasp* graduating, Dava Foxx led a ramshackle, devil-may-care type of lifestyle, bouncing from Miami to her hometown in New York. Dava Foxx was juggling two jobs at once, working the front desk at United Health Care and earning extra cash on the weekends at Hooters restaurant. After a decade of working at Hooters, Dava was promoted within the company and was even featured in the official Hooters calendar!

Now, this goddess will stream a free camshow for you LIVE…this Friday!

WHAT YOU NEED TO KNOW!

Come back next Friday, December 23rd and watch Aiden Ashley!