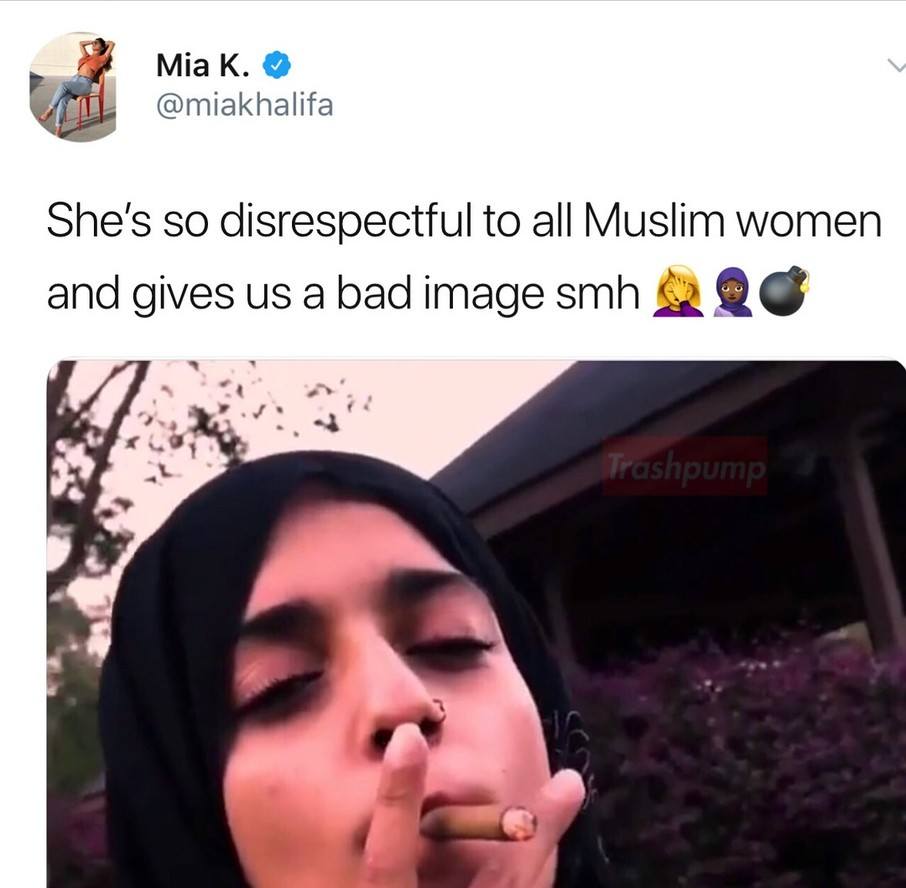 The diss song was released after Smoke Hijabi (one half of iLOVEFRiDAY) misinterpreted a tweet seemingly posted by the former pornstar the same name. The tweet went along the lines of ‘‘[Smoke Hijabi] is so disrespectful of Muslim women smh (with a photo of Smoke smoking in a hijab). The photo was actually a screenshot from the video for iLOVEFRiDAY’s October 2017 song “Hate Me,” where smoke Hijabi sings in a hijab while smoking what appears to be a blunt. After the tweet circulated on social media, Hijabi responded with a diss on Twitter and shortly after recorded “Mia Khalifa” with Xeno Carr, who is the song’s producer and the other member of iLOVEFRiDAY. The diss song has so far garnered 46,001,030 views on YouTube. 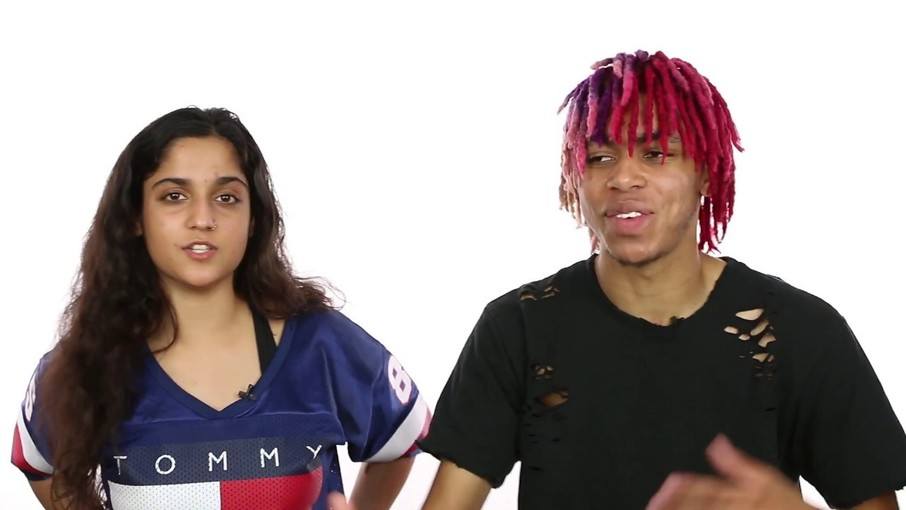 The song was first posted on the popular social media app Tik Tok and has since gone viral. The song’s popularity is a perfect example of people turning their YouTube fame into a burgeoning music career. The duo goes hard on Mia Khalifa, starting the song with:

‘Who do you think you are?

You were sucking dick for a foreign car

They want you at work so, girl, go do your job.’

They then proceed to call her out, telling her how she has had ‘a lot of guys’ which is understandable given the nature of her former work. Other parts of the songs are not so subtle:

‘Is that why you tried to quit three times?

Is that why you said goodbye, retired

Is that why you said fuck these guys?’

The duo then questions whether Mia Khalifa’s boyfriend even kisses her and calls her out for ‘playing with balls like FIFA.’  And then there was this:

‘Now you pop your pussy for the Warner Brothers

(And that bangs, bro)

It is not immediately clear whether iLOVEFRiDAY have responded now that we know the whole song was based on a fake tweet. I’m guessing they won’t as that would be a suicidal move (musically speaking).

How has the reaction been? 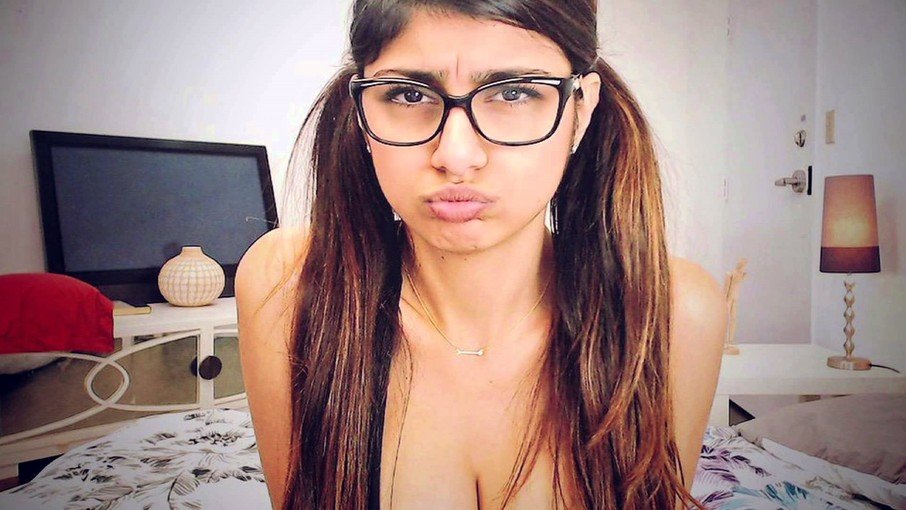 Well, it has been pretty mixed although most of it has been calling out the YouTube duo for their lack of musical talent with others criticizing them for recording a song and a video based on a fake tweet. Here are some of the best reactions:

The first catchy response was from a user called Swirf: ‘Song is so offbeat it’s on beat it’s so off tune it’s on tune. Someone, please explain.’

Another quipped that the song was easily the worst he had ever listened to. One user was particularly unforgiving: ‘I don’t know, but I feel like I got cancer from watching that. They probably picked a “big” name to diss to chase clout, and didn’t want to go after a rapper because they would probably actually get killed seeing as they look like actual children.’

And then there was this one: ‘No talent idiots make a fake twitter for a porn star, write a tweet to themselves to give them a gimmick for a song that was already written. In reality, it was just a hoe self-projecting her insecurities by gaslighting somebody else as the hoe. Now that they’ve been called out on writing an entire song and directing a music video in an afternoon over a fake tweet they play dumb and act like they don’t know what anyone’s talking about. Not to mention the girl who sings the song looks like a dumpster full of medical waste, hence the reason tiktok videos of actually attractive girls lip-syncing over the song are 10X more popular than the actual video.’

It does appear that while millions are watching the video on various streaming platforms, not many think highly of the actual song. Pleasing people is not an easy task after all. 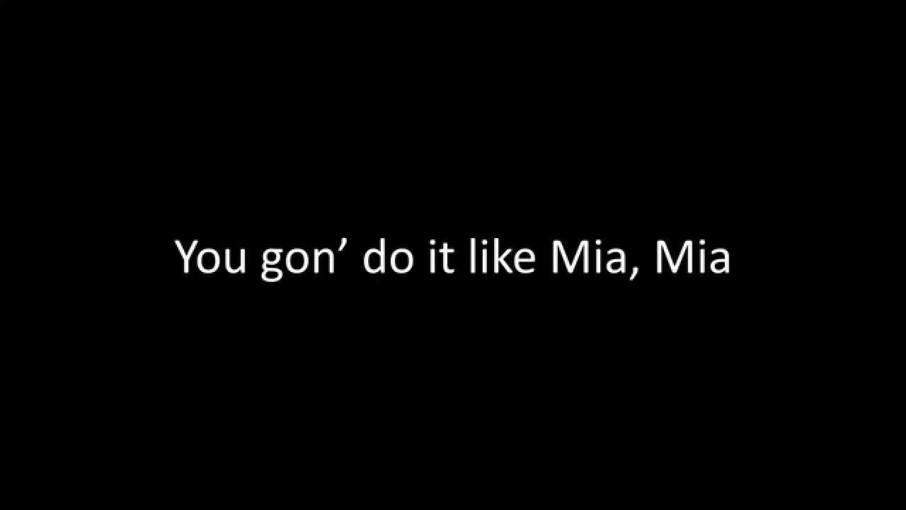 Mia Khalifa actually enjoyed the song, saying in an Instagram post that the song BANGS (pun intended). She also responded to one of her followers who asked her how it felt to be the most hated Arab with: “Pretty good since @Timeflies wrote a song about me.”

Well, whether you love or hate her, Mia Khalifa is still getting you talking. So someone fucking gives some respect to that name!