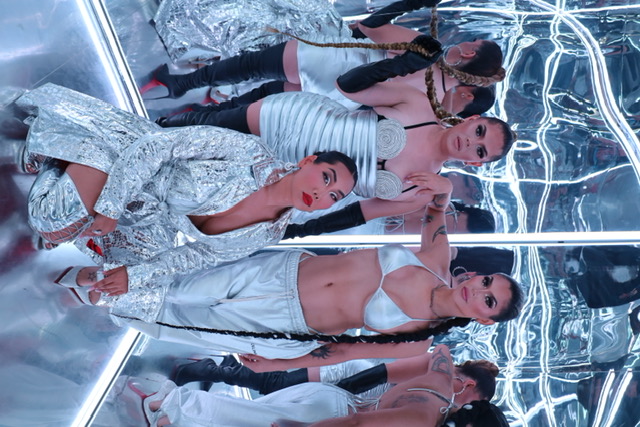 “We’re giving glamour, we’re giving choreo, we’re giving fabulous,” said Presley. “I can’t believe we filmed a music video. It’s always been a dream of mine to be doing music and making music videos and now here I am doing it. Huge thanks to Brad Hammer and his entire team for directing this video and making all of the magic happen.”

“Glamour” can be officially watched on The Gurls YouTube channel.

Presley and The Gurls Co-Founder, Alissah, made their stage debut at the 2022 TEAs in Hollywood, CA, where Presley also served as the Mistress of Ceremonies. Their performance of Alissah’s hit song, “Daddy,” was met with a roaring standing ovation from the audience. The two combined musical forces to create pop group, The Gurls, with an alternating third spot reserved for other LGBTQ performers to join the duo. After a busy summer for The Gurls, Presley and Alissah returned to the recording studio and invited Rupaul’s Drag Race alum Gia Gunn to appear on their latest track, “Glamour.”

“Being in the Ballroom scene, I know better than to make music with ballroom accents and then not book someone in Ballroom to choreograph the video or performance,” added Presley. “So we obviously hired our good friend and former backup dancer, Jeter Gorgeous Gucci, from the house of Gorgeous Gucci and the HBO show Legendary (season one) to teach us some moves and choreograph the dancers. Authenticity was very important to us in terms of style and visual representation, so we made sure all of the dancers in ‘Glamour’ were affiliated with the Ballroom/Vogue scene.”

The Gurls made their official stage debut at this year’s London Pride in front of thousands of fans where they performed alongside Vampire Diaries star Kat Graham as featured guests on her hit summer anthem, “Woof.”

Press inquiries can be sent to [email protected]