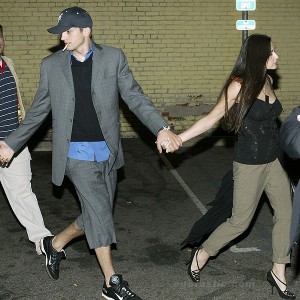 Ashton gets timeout after ripping his big boy communion pants

Ashton Kutcher and Demi Moore just divorced. Their 6-year long celebrity marriage being the most recent to wilt and die under the unforgiving Hollywood heat lamp. The cause for splitsville? Ashton Kutcher’s chronic cheating.

Imagination time: By the the time Kelso hits his fifties, he can still exercise his Hollywood Lothario powers (see George Clooney) while Demi Moore will be getting her ten percent off senior citizen’s discount on shots of wheat grass or whatever the fuck rich people will be making themselves ingest twenty years from now to stay young.

But don’t believe me. Instead, feast your eyes on the following photographic evidence of two college-type babes that Mr. Kutcher allegedly did the bone dance with!

Here’s the one who started it all. 22-year-old, Brittney Jones claimed back in 2010, that she met up with Ashton Kutcher at a Hollywood bowling alley and the two exchanged phone numbers. Jones maintains that she and the actor had sex in Ashton and Demi’s house, specifically, on the living room couch!

The web immediately exploded with juicy images of Brittney Jones. Then, predictably enough, a sex tape, which didn’t featured Ashton Kutcher but some ex-boyfriend splashed on the scene.

And don’t forget this next classy picture.

Nothing says “Later Gator” like some spunk on the back

Supposedly, on the eve of his damn wedding anniversary, Sept. 24th, Ashton Kutcher had sex with some random 22-year-old blond party girl! (pictured on left)

So I’m gonna shut up for now while you check out the type of hot ass that celebrities pull down.

If you’re thinking you need proof and are just too embarrassed to admit that you care about dumb celebrities, I got your smoking gun right here:

Funny, that girl in your ride doesn’t look like Skeletor. CAUGHT! Yo ass is grass you cheating mofo! Ask me if I found another unflattering photo!

Now, to give Demi her fair shake, suppose Ashton Kutcher and Demi were around the same age. I bet they’d still be together. Check out some of Demi Moore’s nude pictures from her old modeling days! And no, she’s not modeling black bear fur panties.