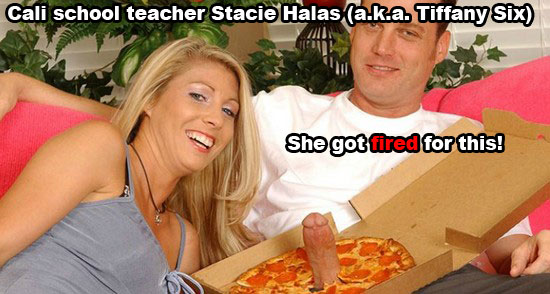 This is wrong. According to IAFD, Stacie hasn’t been active in the adult business since 2007. Judge her not on her past, but on her present credentials as a teacher. This move sends the wrong message that no matter what, one can never make amends for their past. But it’s all hypocrisy, because Halas never did anything illegal whereas soldiers can come home after doing god-knows-what in the middle-east and nothing is ever mentioned. There are worst professions like used car salesman, pawn shop brokers, and politics that, at least in my eyes, are morally worse than fucking on film.

Well, lo and behold, Porn.com actually has Stacie Halas/Tiffany Six’s scenes and you can watch them right here.