When I saw the trailer to Soma’s latest film Rubber Bordello I knew I had to interview her. A black and white , silent  fetish film has got to be unique. It has great music as well. 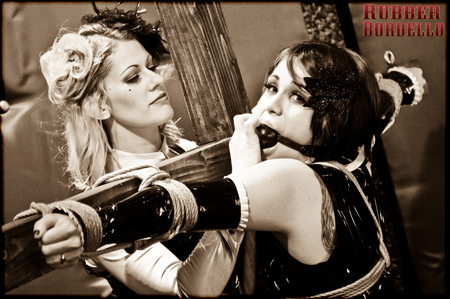 1 Can you tell us a little about your background?  I have a very colorful history.  I grew up traveling throughout the world with my eccentric family. I spent time as a street punk and many years in the restaurant industry.  I even had a job for awhile as a film projectionist.  After becoming disillusioned by the rigid lifestyle in high end restaurants I decided to become a fetish model.  I moved from the East Coast to California.  I imagined eating mangos and running on the beach everyday.  I think I’ve been to the beach twice in Cali and have spent most my days in dungeons.

3 Which fetishes do you practice on screen and which are some of the scenes you’re most proud of?  The video work I’m proudest of is Rubber Bordello which I self directed and produced.  Next would be anything I did with Ken Marcus and Dungeon Corp.  The photo work I like the best was with Chad Michael Ward, Lithium Picnic and some unreleased work I did with Sam Holden.

4 You’re the owner of a dungeon. How would you describe a typical client and what services are most in demand?   I don’t have a typical client.  My clients come from a broad range of socio-economic backgrounds and kinky tastes.  I have a client who saves up all year to see me around his birthday with the permission of his wife.  I have clients who are very successful and need to loose control on a regular basis as a form of release from stress.   I may dress one gentleman as a sissy slut and the next day be performing extreme medical play procedures. I guess the most typical thing about my clients is that they are all men with only a few exceptions. 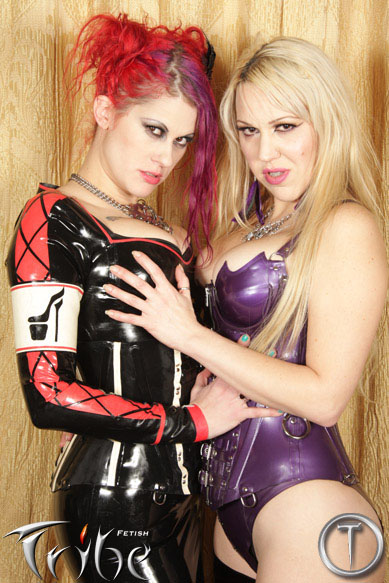 5 Can you tell us something about Candy Scandals?   Candy Scandals was the name of a burlesque troupe I began while working in a Kansas strip club.  Later I turned it into an alternative modeling company with the help of Jenn Martin and Lalo Soze.  We had a great group of girls all over the country who worked as models and performers with our group.  We hosted shoot outs, parties and fashion shows.  We helped girls find work and acted as spokesmodels.  We were all new to the business and it didn’t last for long.  We ended up building some great friendships in the process and having a lot of fun.

6 What’s the most difficult position you can get into as a contortionist?   I haven’t kept my body in shape for contortions.  Last time I tried to do something I sprained my elbow… It’s not something I do on stage anymore but…I’m still very flexible and it has it’s sexual advantages.

7 How did you get to choreograph a kung fu fighting scene?   I actually did the scenes as an actor but worked with a martial artist who choreographed the scenes.  This was near the beginning of my adventure as a fetish model.  I worked for a company that specialized in custom movies.  They produced short films where a man and a woman fight.  The woman always wins at the end.  (Which was right up my alley…)  I had so much fun running around in the woods and people’s backyards making these super cheesy kung fu fetish films.  I learned some moves that a started using in wrestling sessions for a short time.

8 Which medium do you like to paint with and how would you describe your style? Where can people  see your work?  I paint with acrylic on found objects, glass and canvas.  My work is sort of post modern, I guess.  My paintings are all in my home and dungeon right now.  I will be doing an exhibition in the future, but I’m focusing more on writing and film making currently.

9 You’ve traveled worldwide for your work. Which are some of the favorite places you’ve visited and why?  I love Croatia.  It’s such a warm, passionate country.  I love being by the ocean and eating gorgeous food.  Poland has always been a favorite of mine. Prague is a mysterious amazing place with all sorts of weird catacomb like shops and bars throughout the city. I love the beautiful historic buildings and the canal in Amsterdam.  I love visiting the fetish shops, and going for a visit to the red light district… Hamburg, Germany is a big favorite for me.  They are overtly sexual through out the town.  I’ve never seen anything like it.  It’s also home to the best and biggest fetish store in the world, and is great for dungeon time.  Japan is so foreign it’s like going to a different planet.  Their culture, style and food is delightful to me.  Japan has these great Mistress bars that you can visit for food, an SM rope and candle show, and if you’re lucky, a beating.  I love Britain for a million reasons, one being it’s the only place you can get a proper cup of tea…

10 How did you get to be a mixologist?  As I mentioned before I was in the restaurant industry for many years.  I worked in low end all you can eat crab shacks, high volume bars in the city and world famous fine dining establishments.  I learned a lot about booze along the way and made it an area of personal study.  I love to drink and make concoctions so it just ended up I got good at it. 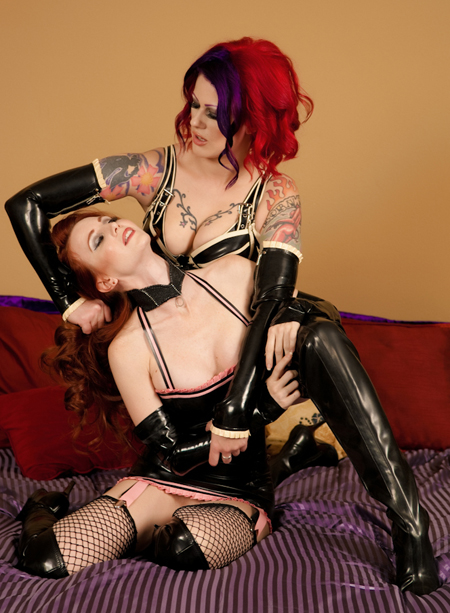 11 Where did the idea for Rubber Bordello come from?  I had wanted to do a black and white sex film since I was 19 years old.  Later I developed a fascination with vintage culture especially around the early 1900’s.  I originally wrote Rubber Bordello as an idea for a website for a large company.  They turned me down so I decided to make it myself with the help of some of my hedonists friends.  I worked very closely with Fat Mike on the project and he and Dustin Lanker put together a beautiful period appropriate soundtrack.

12 Can you tell us something about the plot?   It’s the day in the life of a fetish whorehouse in New Orleans in the early 1900’s.  It is definitely a Female Dominated whorehouse and the major objectification is not of the women who work there but those who come through their doors.  This particular day a cowboy and a man with a prudish wife come for services.  They end up completely transformed by their experiences at the Rubber Bordello.

13 How did the performers adapt to the silent movie style of acting?  All the performers adapted really well.  I made sure everyone knew to overact, use big eyes and over the top gestures.  Master Feenix and Sparky Sinclaire were especially good at making their performances very authentic.  The great part was we could play music, have fans on and have direction happening in the background.  It also didn’t matter if people messed up their lines.  It went really well.

15 You’ve said it was difficult to make but can you share one or two funny things that happened on set?  It was difficult as far as the heat and some personality conflicts.  We worked 17 hour days in latex, in the Valley in a studio with no AC.  We had to do makeup touch ups about 15 times because we were covered in sweat.  We were so sweaty we tried to work it into the story here and there.  Like the part where I do that crazy ego rock star fan thing… that happened because we realized the fan was blowing our hair back when we were supposed to be indoors. 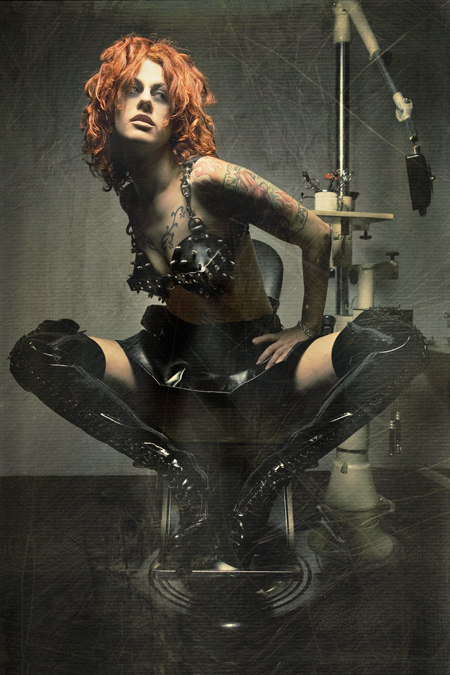 16 Can you tell us about the music by Fat Mike?  Fat Mike’s soundtrack with Dustin Lanker is purely ragtime.  We had to have a really good soundtrack to go with the movie since it’s silent.  A lot of what we are trying to say during the film had to be explained through music.  There was just as mush time spent in the studio for the soundtrack as for the film.  Mike named all the song titles to go along with what scene they were played with.  There was one song that had to go along with a 10 minute sex scene so they had to stretch it out forever.

18 You’ve plans for Rubber Bordello 2.It’s going to include pony play. Can you give us some hints of what to look forward to?  Pony play will be happening for sure.  That’s all I’m ready to release now except be sure it’s going to be even filthier.

19 Which other periods would you like as the setting for future movies and why?  My production company will focus on vintage periods.  You’ll have to wait and see what comes next!

20 Where can people find you on the net?   www.SomaSnakeoil.com    www.RubberBordello.com