Kay Brandt has founded her own company and is going to have her films distributed by Filly Films. You can read her interview on LadiezNight.com  Below is my interview with her new lead cameraman, Mike Quasar. 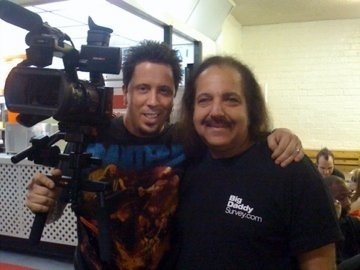 First of all congratulations on the good news.

1 What have you been doing since your brief stint with Girl Candy last year?

I am still shooting 4 movies a month for Zero Tolerance/3rd Degree – that’s been my regular gig for 10 years and always my first priority. They are my family. I have a movie coming up for Wicked in April. I’ve also been shooting for Joanna Angel which is awesome because she’s one of the smartest,most creative people I know. I’m actually busier now than I think I’ve ever been, which I don’t take for granted because I know not everyone is so fortunate right now.

2 How do you know Dion have you ever worked for him?

“Back in the day” I shot for Dion at Elegant Angel so I’ve known him about 15 years.

3 Have you had a chance to watch any of Filly Films?

I have watched all of their trailers and I think they’ve done an incredible job at creating a respected brand in such a short period of time. They did everything right.

I have no idea and I don’t think she does either. I saw the trailers for her Cherry movies and was completely blown away. We started interacting on the lezlovevideo forum and talked about perhaps working on something one day. Then somehow we decided to meet for lunch and discovered our mutual love of martinis and we’ve been friends ever since.

5 What do you like about Kay’s work as a director?

6 What do you like about filming girl girl and what have been some of the highlights of the movies you’ve shot so far?

I can say that shooting all girl movies is both my greatest joy and my biggest curse. I’ve shot so many amazing scenes over the years, not because I’m some gifted director, but because I’ve had the good fortune to have some of the best performers in the business work for me. I don’t even have to try, they deliver the scene to me. I just have to keep the camera in focus. The opposite of that is when I end up with unknown entities that show up and are incapable of performing a compelling scene. The fans of this genre know when a girl is phoning it in and they are very vocal in their criticism. When I’m shooting a scene that I know I can’t salvage, I feel like swallowing a bottle of Drano. I can’t make a girl like another girl sexually and I wish the agents would stop advertising that their girls will perform G/G scenes when clearly they are not attracted to other women at all.

My current level of alcoholism can be at least partially blamed on gay-for-pay G/G performers.


6 You’re a regular on the Lezlove Forum. What misconceptions if any do you think the fans have about the way scenes are shot?

I discovered lezlove by accident when someone told me that my Babes Illustrated movies that I shot when I was with Metro were getting rave reviews there. I was simply shooting what I thought was hot and apparently some others agreed with me. Since then, I have used that message board as the template for everything I’ve done in the G/G realm. I know those are the real fans and I know when I’m shooting something that they will love it or that they will crucify me for it. I know a lot of them think that some douchebag heterosexual male director tells the girls what to do. I happen to be one douchebag heterosexual male director who tells them to forget that I’m there. Sometimes magic happens and sometimes I want to jump in front of a train. It’s always a gamble.

7 Who are some of the girls you’d like to shoot for Kay and why?

First of all, I have no say in who Kay wants to shoot. She’s the boss who, for whatever reason, wants me to shoot her movies. I’m privileged to do so but Kay will cast whoever she feels will best portray the characters she creates. I’m not her partner. This is her deal and I couldn’t be happier for her.

8 Will you be attending any of Kay’s fitness classes?

I shoot almost every day and on my off days and evenings, I edit and drink profound amounts of alcohol. I simply have no time to care about my physical well-being.

9 Where can people find you on the net?

I’m on twitter @MikeQuasar or you can go to Zerotolerance.com or Thirddegreefilms.com to see trailers, upcoming releases etc,