Once upon a time we here at porn.com offered you, our loyal sex crazed viewers, a clever little parody entitled Exxxtreme Makeover: Office Edition… Well it appears a certain individual has one-upped us on this whole makeover business! 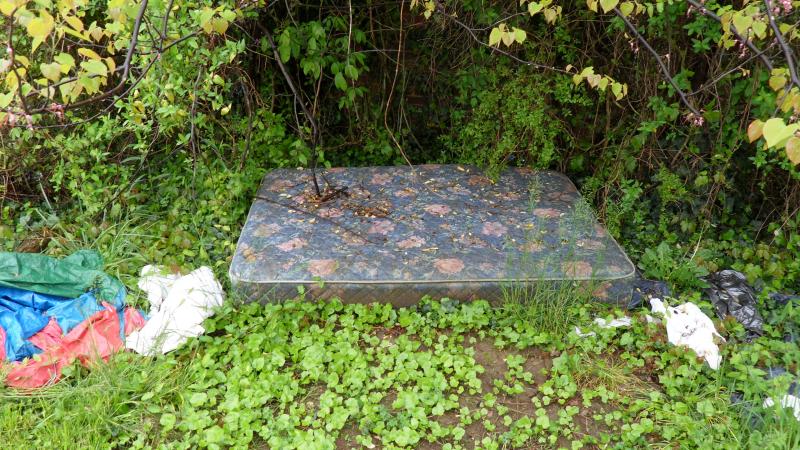 Fuck Mattress before its transformation…

Bryan Lewis Saunders is an artist from Johnson City (lol), Tennessee. A certain prostitute hangout was brought to his attention recently – namely a dingy, worn out, smelly-as-fuck mattress behind his apartment. So instead of shunning these sewer rats and complaining like a whiny bitch to his landlord, he did what any creative mind would do – refurnish the fuck out of this slum-suckfest!

Lots of work to be done here!

He rounded up a couple buddies to help transform this dank, back-alley getaway into the 5star resort of all mattresses. $60 later and this public piece of tainted land is upgraded with new sheets, pillows and a duvet! Fucking SCORE! Bring on the classy prostie cunt!

CUMplete with flowers and everything!

Gawker.com reported, “The whole time we were putting it together I was thinking, ‘We are cleaning up downtown Johnson City one f**k mattress at a time!’” Saunders told The Daily Dot. “You have to start somewhere.”

Check the beautiful little flowers he planted too! Get a good look at em, cuz guess what happened a week later? This place was fucking destroyed – flowers trampled, mattress soiled like fuck, condoms and panties littered the scene… just a disaster! Oh well, they’re prostitutes for a reason I suppose. Saunders was even nice enough to supply the clean panties and (un)used condoms! What a straight up gentleman!