You may know our fan and friend Insane9999x from his cam shows or from this post, well this weekend he went to Exxotica and was nice enough to hand out Porn.com swag. He also wrote us a little review of the expo and took a bunch of photos for us. 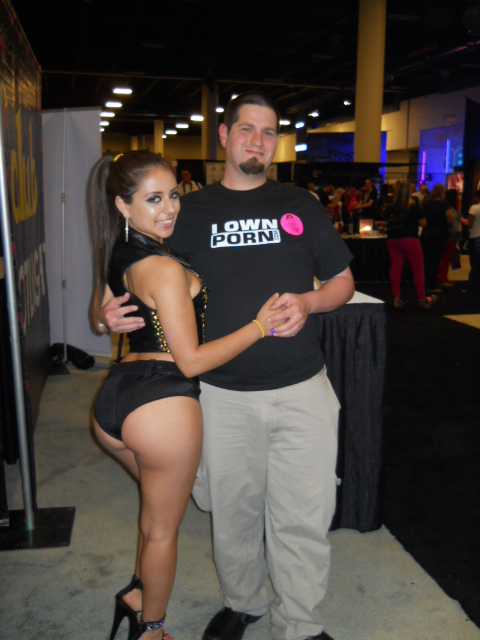 On Friday, I attended the Exxxotica Expo in Ft Lauderdale. I was there for several reasons, to help promote Porn.com, see the beautiful adult film stars in person…. and have a good time! Mission accomplished!

Although the Expo was a little smaller then I thought it would be, it made up for it in quality over quantity. They had a huge section of retailers you could buy anything from penis shaped lollipops to Fleshlights to lube and DVD’s and there was even a Club Magazine Spotlight section where to could meet and greet the stars.

My Free Cam Site and Chaturbate both had booths with girls performing live on their websites and live radio broadcast too. Free DVD’s were being tossed out to the attendee’s (one hit me in the head!), along with free trip giveaways and other contests and prizes for people brave enough to hop on stage.

One of the most popular sections was The Dungeon. Several different restraint displays were setup and patrons were encouraged to have fun with the props… with supervision of course. There were seminars on how to make the break into the adult film industry, the perfect sex toy, Joanna Angel a guide to butt sex and Ron Jeremy still telling terrible jokes, but, that’s why we love him.

Last, but not least, the real reason most people go to these things… the Stars. There was everyone there from heavy hitters, up and commers to soon to be Stars. There wasn’t time to talk to a lot of them, but they were all very friendly and they seemed as happy to see their fans coming out as the fans were to see them.

I handed out Porn.com shirts and temporary tattoos to barter for pictures for the website, and believe it or not, it worked… which goes to show that people will do almost anything for a free t-shirt, lol. I really enjoyed the Expo myself and was happy to help raise awareness of Porn.com to a lot of people.