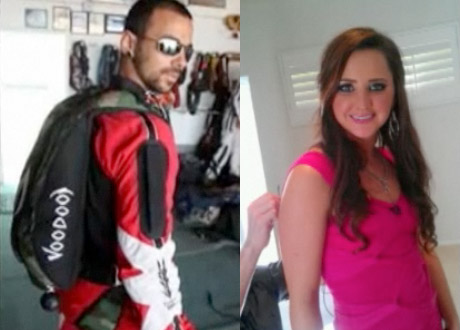 Operation “Cumikaze”was in full swing when Alex Torres took to the skies with a trusted pilot and one cute brunette receptionist, Hope Howell. Once in flight, Alex and Hope started boning inside the plane right next to the pilot. The sensational video then cuts to the pilot giving a quick thumbs up before the two naked skydivers leap out of the plane, fluttering and fucking at a breakneck pace of 120mph. After the stunt, a nearby high school got wind of the incident and Alex’s published video went viral before it was eventually taken down by the daredevil stud himself.

As of now, Alex Torres and Hope Howell have both been fired from the skydiving company they worked for. The general explanation that these two have given for their attention-seeking spectacle was “get the attention of Howard Stern.”

Honestly, the video is pretty awesome. All it’s missing is a mountain dew can snapping into Mr. Alex Torres’ open hand as he burps his worm upon landing.