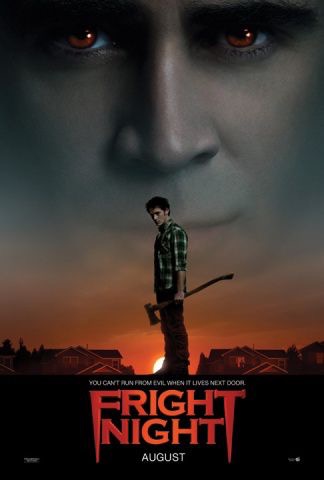 Raising the Stakes! (relax, its not the worst vampire pun out there)

In a Nutshell: Greasy, bad-ass vampire moves in next-door to earnest-looking high schooler and his single mom. Aww. Cue mayhem and bloodshed!

I’ll be the first to admit, I’m not one of those inflexible curmudgeons who has a shit fit every time Hollywood dredges up an old classic and jams it through its remake factory. Let’s face it, “Fright Night” the chintzy 80’s original, once stripped bare of its associated nostalgia, kind of sucks. Pun totally intended.

The new “Fright Night” is a welcome throwback to the concept of vampires being homicidal killing machines and not fang-less, Kabuki-caked wimps who dazzle like cheap sparklers in the daytime. Colin Farrell plays “Jerry”, the creepy but charismatic suckhead who moves in next door to gawky teen, Charlie (Anton Yelchin) and his MILF-ish mom, Jane (Toni Collette). Oh yeah, and that insufferable hate-him or love-him asshat, McLovin’ (Mintz-Plasse) makes his first worthwhile appearance since “Kick Ass” as Charlie’s ex- bosom nerd buddy. When students go missing around school, it’s McLovin (that’s his fucking name for all intents and purposes)  who connects the dots and starts amassing a shit ton of anti-vamp weaponry a la “Monster Squad.” As such, he fails but not before revealing the truth to Charlie.

“Fright Night” is predictable but not to the point where its depressing. The film makes sure to add little, seemingly unimportant details to bolster up the believably so you don’t have to suspend your disbelief for quite that long, like the fact that it’s set in Las Vegas, which gives Jerry a good excuse to be out and about as a night-time construction worker.

Also, what drives me fucking nuts about monster movies is when the revelation of a monster’s identity is only exclusive to the kid protagonist and not to any adults, no matter what huge piles of evidence there are to speak otherwise. When scared-stiff Charlie begs his mom not to open the door for Jerry, the movie doesn’t linger on that frustrating bit of supernatural-boy-cried-wolf schmaltz but kickstarts one of the more dramatic moments in the movie when Jerry —after being denied entry, goes ape-shit, rips up the gas main connected to Charlie’s house and blows it up to smithereens.

“I won’t need an invitation if there’s no house!” Fuckin’ delightful. 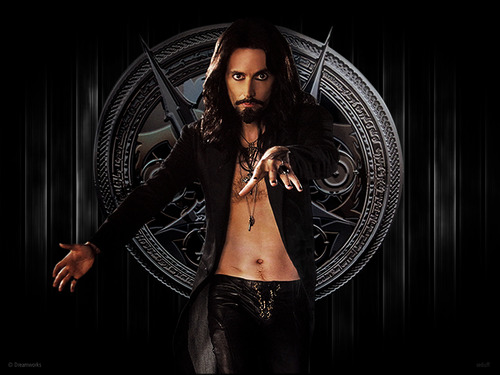 Anyway, “Fright Night” isn’t a masterpiece by any means, as noted by the lackluster August release date, but it’ll sure illicit more laughs than groans, especially with Farrell digging deep in his actor’s bag of tricks and mugging every frame with that Blue Steel-uni-brow glam stare. You can blame hideous afterbirth, “Twilight” for that.