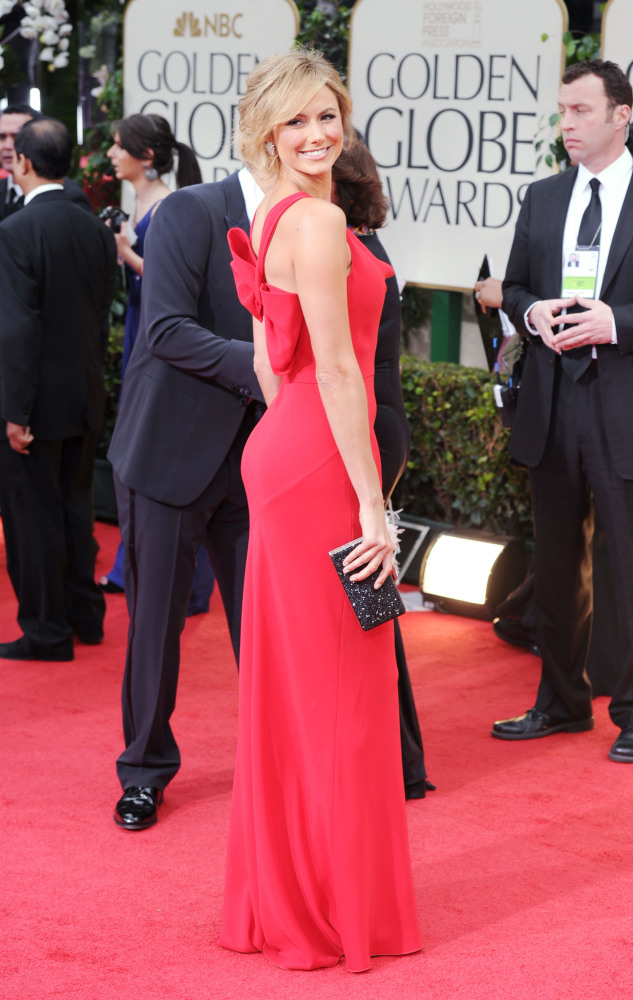 George Clooney’s latest piece-of-ass, Stacy Keibler, might just be the A-list actor’s sexiest girlfriend yet. While channel surfing last night, I came across the red carpet telecast of the 69th Annual Golden Globes and something caught my eye: Stacy Keibler’s unbelievable backside.

This girl has a rump that makes Kim Kardashian look bad. As soon as I saw that ass, she had me on Google image searching all of her racy photos, and the ex-WWE wrestler has quite the collection of naughty images for you (see below)!

This 34 year old blonde beauty is originally from Baltimore, Maryland. She attended the all-girl Catholic High School of Baltimore (can’t you just imagine Stacy putting on a school girl uniform and needing some discipline for having a poor attitude in class!). It seems Ms. Keibler is a role-playing dream and that’s probably why she did so well as a celebrity valet for some of the top wrestlers when she worked for the WWE.

Hardcore Stacy Kiebler fans probably have seen her in Hollywood films like Pecker and Liberty Heights, and she was also a contestant on the second season of Dancing With The Stars where she took home 3rd place. She has also done some work on television sitcoms, but her sexiest appearances are definitely the ones she made while working in wrestling and the modeling centerfolds she shot for men’s magazines.

A graduate of the Jean Kettell Studio of Dance in Dundalk, Maryland where Stacy Kiebler studied ballet, jazz, and tap dancing – she is a lot brighter than some fans might think. After all, it’s sort of unfair for a girl as hot as Stacy to also be smart, but it’s true. She graduated from Towson University with a 3.7 grade point average and a degree in mass communication.

It was during her time in college that Stacy Kiebler first found her way into the spotlight as a cheerleader for the Baltimore Ravens football team when she was just eighteen years old. From that first job shaking her ass on the sidelines, Stacy parlayed her education and outrageous beauty into a career that is still skyrocketing.

Famously performing as one of the Nitro Girls in the WCW wrestling league, she quickly got promoted to increasingly prominent roles in the company as a manager named Miss Hancock (also sometimes referred to as “Miss Handcock”). Later when the WWE bought the WCW Stacy Kiebler was a big part of the ‘Invasion’ storyline and managed the Dudley Boyz. Keibler also was credited with managing Test and Scott Steiner as well as The Hurricane and Rosey. She also picked up the nickname “Super Stacy.”