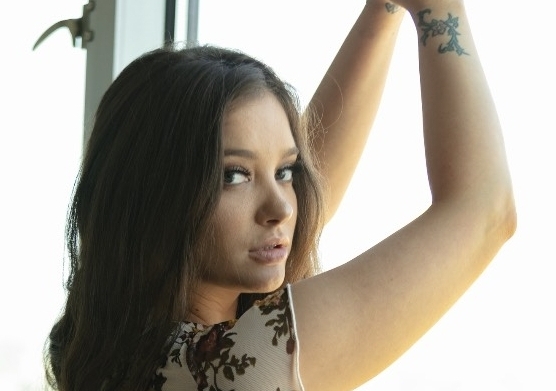 Los Angeles – Successful starlet Gia Paige has added four more award nominations under her belt, this time for AVN. The brunette beauty dazzled directors, critics, and fans in 2018 with her feature roles. This did not escape AVN, as they have given Gia both acting and performance nominations. The AVN Awards will be held in Las Vegas on January 26th, 2019 at the Hard Rock Casino.

Gia starred in quite a number of features, including “Love In The Digital Age” (New Sensations Romance). Gia’s feature role as Sara, a young girl who gives up her connection to technology to find out what life is like without constant contact, earned her a Best Actress – Feature nomination. Gia was also nominated for Best Actress – Featurette for “Jealous Brother” (Pure Taboo/Pulse). Starring as Gina, Gia dealt with the forbidden attraction to her stepbrother.

“I didn’t think my nominations could get better but here I am, enamored and once again speechless,” exclaimed Gia. She continued, “I wouldn’t be here without the directors who had me on their set, and the fans that have given me so much love and support. Thank you all so fucking much.”

Follow Gia on Twitter and Instagram, and rate her five stars on her FreeOnes page. Gia loves to be spoiled, so get her a gift from her wish list. Visit Gia’s clip store ILoveGiaPaige.com. Fans can also chat or text with Gia via Sext Panther.