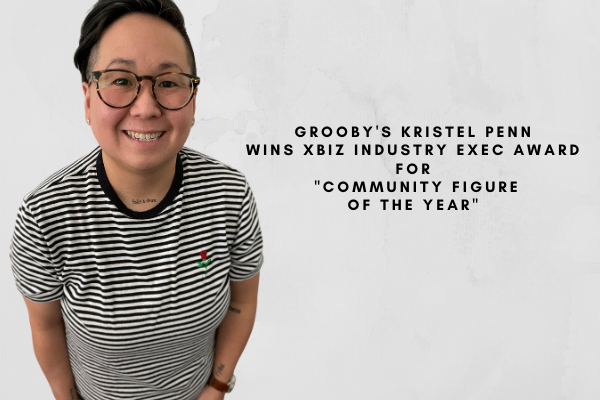 “This win holds personal significance to me because the ‘Community Figure of the Year’ category feels like an acknowledgment for being myself,” said Penn. “I spent most of my adolescence and early adulthood trying to hide my authentic self because the people around me made me feel like there was something wrong with me. As I mentioned last night, I was the weird kid, and then I was the closeted gay weird kid. At Grooby, and for the last 12 years working in the adult industry, I get to be exactly who I am. I know there is great privilege in that, and I’m honored that I get to use my privilege, my voice, and my platform through Grooby to support and uplift the trans adult community.”

In 2017, Penn won the XBIZ Industry Exec Award for “Brand Ambassador of the Year” for her work with Grooby. She was also nominated in previous years for “Marketing Executive of the Year” and “WIA Woman of the Year.”

“Congratulations to Kristel on her XBIZ win,” said Grooby founder, Steven Grooby. “I don’t believe most people really know how much goes on behind the scenes and what she does to try and reach out, and make sure that people in the trans adult community and the wider adult community are doing well, or helping them if they’re struggling. She’s brought a number of initiatives to the table that Grooby has acted on, and more than she does personally and through her other platforms. We look forward to continuing to encourage and support her where and when we can.  Thank you to XBIZ for honoring someone who very much deserves a win this year.”

Penn continued, “I want to extend my sincere gratitude to XBIZ and my colleagues who voted for me this past year. I also want to thank Steven Grooby for taking a chance on me 12 years ago and for giving me the guidance and space to make a place for myself in our industry. I also want to dedicate my win to my Grooby partner-in-crime, Sparky Snakeden, who passed away last year from cancer. He believed in me as ‘Kristel Penn’ long before I did. If I felt like I wasn’t important enough or cool enough to be at a work function, he’d assure me I was and he’d accompany me with a confidence that I simply did not have. His support throughout our friendship has helped shape me into the person I am today in this industry.”

In addition to being Grooby’s Creative and Editorial Director, Penn is also the Executive Producer of the Transgender Erotica Awards, created by Grooby over 13 years ago. In 2016, she started boutique PR and marketing firm, IkigaiMarketing.com, with a roster that includes many of the trans adult industry’s top performers. Follow her on Twitter at @thekristelpenn.

Most recently, Penn started Sad But Rad Club, an initiative to change the narrative of mental health and wellness. More information can be found at SadButRadClub.com.