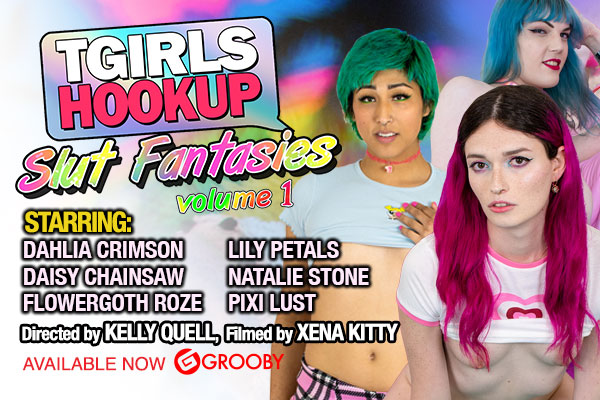 Grooby’s newest release, TGirls Hookup: Slut Fantasies Volume 1, is a fun, story-driven solo release featuring a stellar cast of performers. Directed by Kelly Quell, this DVD is now available for purchase at the GroobyStore.com and other major retailers.

“I’m super excited for everyone to see this DVD,” said director, Kelly Quell. “It has an All-Star cast of some of the hottest trans girl stars, and It’s a very different concept from any solo content I’ve seen or have produced thus far.”

“The girls really enjoy doing these scenes. We write the stories together. These are the first six solo scenes we shot under this series and Xena and I are very proud of it. I’m very happy to have had the chance to work with each of these amazingly talented performers and I can’t wait to work with them all again.”