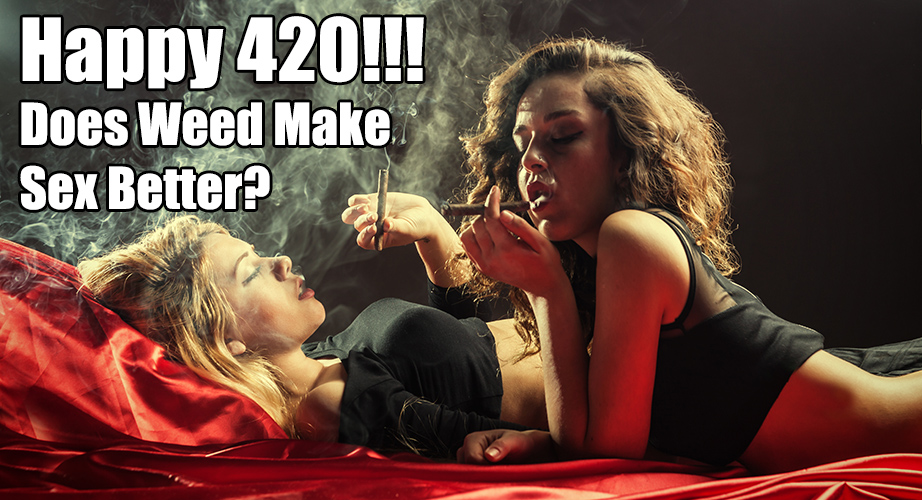 Happy 420 one and all! For those of you who are out of the loop, April 20th (4/20) is a day for celebration! Stoners from all over the globe take a moment to light up and inhale one some sweet, sweet green. April 20th has also become an opportunity for advocates for Medical Marijuana and decriminalizing the herb to come together hand have their voices heard… plus they can totally get a buzz on as they do it. Score!

We ask frequent pot smokers if marijuana makes sex more pleasurable for them and why. The results we got may not come to much of a surprise. Over 85% of the wacky tobacky users we asked answered yes, weed makes sex better. When pressed for a reason, the results were not as clear-cut. Some said the social interaction inherent with smoking weed helped create stronger mental connections significantly more felt that the calming effect associated with weed enhances the euphoria you get during orgasm. A small percentage also said it helped with sexual stamina. Wow, we just thought it was fun.

This ended up being a good group to interview since not all of the performers featured smoked weed on a recreational basis. The ones that do gave surprisingly detailed and varied responses.  Blonde cutie Katie Morgan was quick to share she felt that “marijuana makes a lot of things better.” while XXX sensation Lauren Phillips recalls having an edible once before sex and the experience made her orgasm faster than normal (which is saying a lot). Missy Martinez takes an opposing side and refuses to smoke weed before having sex. For Missy sex becomes the last thing on her mind after indulging.

There was a stronger consensus with this one and it certainly ended up being very pro-pot, but we may not find an easy answer. This is going to depend on who you ask.

The truth is, marijuana like other substances can make you feel good. They can lower your inhibitions and let you try things you normally wouldn’t. This can be a good thing OR a bad thing. If you want to introduce a little weed smoke into your sex life than there are some guidelines we suggest…

Disclaimer – We don’t suggest you break any local laws. So be smart about it and wait for your chance…

What do you think? If/When you’ve smoked marijuana do YOU find it makes the experience more enjoyable? Share your experiences in the comment area below or hit us up on Twitter @worldsbestporn

“I don’t need drugs to enjoy this… just to enhance it.” – Otto, The Simpsons