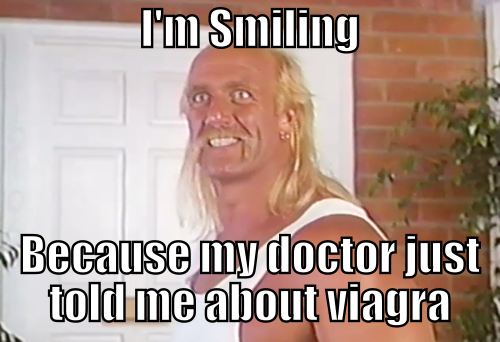 The HULKAMANIAC has been spotted thrusting his hulkish member into his best friend’s ex WIFE! He’s also been gracing pictures with the infamous Kim Kardashian which is very fitting, considering they both can now brag about exposing their asses to the masses.

That’s right, it appears Hulk’s best friend, “Bubba the Love Sponge” (who is a well known radio DJ) allowed Hogan the pleasure of stickin’ it in his former female friend. Even weirder, is that Bubba was present in the room next door. He actually says to the couple, “you guys do your thing, I’ll be in the office if you need me” before swiftly exiting the canopy bed love nest. It’s stated that during the romp, Hogan is seen examining the canopy bed curtains in such a manner that suggests he may purchase a similar set for his own bed some day. Not very “Hulkish” of him (or maybe this slut just couldn’t please?).

Either way, right before the fuckfest ensued, Hollywood Hogan received a cell phone call – complete with shitty daughter Brooke Hogan’s shitty “hit song” for a ringtone. Fuck that noise. He wasn’t having any of that call either, he just wanted to get to humpin’.

After both achieved orgasm, the washed out “Immortal One” breathlessly stated he “can’t believe the fucking even took place, as I just ate 10 minutes beforehand”.  Look, it was sashimi, dude – not like you just ate a plate of pasta at your shitty, failed restaurant “Pastamania” or anything.

For a complete account of what went down during this royal rumble in the sack, check out Gawker’s detailed play-by-play. It really gets intimate. If you don’t like reading or clicking links, we won’t disappoint BROTHER! I wish I could say we have the full 30 minute tape, but it seems the Hulkster laywered up pretty quick. So 1:41 will have to do: