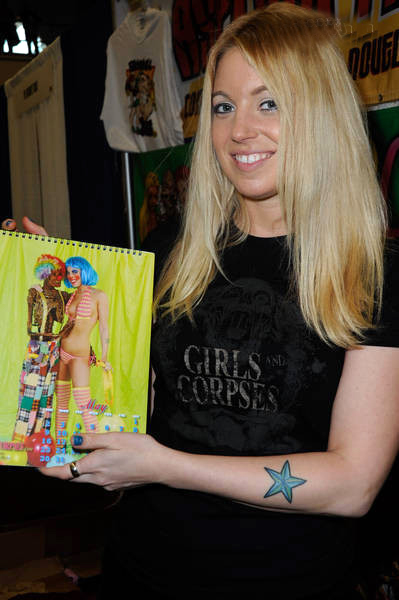 Let’s all have a moment of silence for Hollie Stevens.

Nestled peacefully in her bed, with her hand gently clasped to her husband, comedian, Eric Cash, Hollie Stevens passed away in her sleep last Thursday, July 3rd.

Hollie Stevens painted works so exceptional that they’re still currently featured in the Hyena Gallery in Burbank, California. Stevens also had a gift with words, writing regular columns for indie magazines, Girls and Corpses. If that doesn’t make an indelible impression, let me direct you to her other eccentric achievements: accomplished DJ, performance artist, kick-boxing champion, and of course a wonderful wife and beloved friend.

In March of 2011, Hollie was diagnosed for stage 3 breast cancer. The following year saw the cancer metastasized to her brain, liver, rib and bone.

That’s about all I’ll dwell on her dying. Hollie didn’t die alone. She was with Eric, the love of her life. She spent her last night on this world with her husband and as one can imagine, it must’ve been an intimate, heart-wrenching affair to see the one you hold dearest close their eyes forever. The world lost one of its free spirits.