A long-time ring announcer for World Wrestling Entertainment, Lilian recently made her return to the company after a two-year hiatus. A skilled singer, Lilian is as known for her renditions of the national anthem as she is her ring announcing.
Recently, she has released her second EP, My Time, available now on iTunes and Amazon. 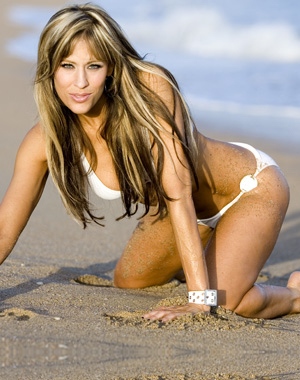 The daughter of the legendary Hulk Hogan, Brooke has earned her share of criticism for her role as authority figure over the Knockouts division.
Regardless, she has been far better than most thought she would be and does not feel out of place in front of the camera. Only time will tell what kind of impact (pun intended) she has on TNA in the future. If all else fails, she probably has a future with the Jersey Shore cast.

Like the previously mentioned Sarita, Winter has seen her television time dramatically reduced since Bruce Prichard took over as the creative head of Impact Wrestling.
Before that, she was a dominant Knockout, capturing the Knockouts title and serving as the division’s top villain.
While the future is murky for the British beauty in Impact Wrestling, there is little doubt that she will continue to make her presence felt across the globe.

A former member of the Lingerie Football League, playing for the Chicago franchise, Summer Rae has made a name for herself in her short stint with Florida Championship Wrestling.
She has been the general manager of the developmental territory and has recently begun her in-ring career.
No one can know for certain what impact she will have on WWE television, if any, but Vince McMahon loves blondes and that bodes well for Summer’s chances.

The first and only woman to compete in TNA’s Gut Check competition, Taeler Hendrix elevated herself from indie talent to a member of the second largest professional wrestling company in North America overnight.
With recent departures seemingly opening up space in the Knockouts division for new talent, it will only be a matter of time for the Massachusetts native.

The self-proclaimed “queen” of the TNA Knockouts division now ranks as one of the longest-tenured women in the company.
A multiple-time Knockouts champion, Madison has recently been featured in an on-air relationship with referee Earl Hebner.
With a lack of heel Knockouts on the roster, another program for the title may be in the very near future.

Kaitlyn was thrust onto WWE television as a part of NXT: Season 3 as a replacement for another talent and made the most of her opportunity, winning the competition and earning a spot on the main roster, despite having little to no pro wrestling experience before appearing on the show.
Kaitlyn has learned on the go over the last year and a half, always improving and evolving. Her personality has gained her a strong following of Internet fans and recently, she was awarded a Divas title match, which she will receive at September’s Night of Champions PPV.

Perhaps the most gifted in-ring worker on today’s roster of WWE Divas, Natalya is a third-generation performer, the daughter of Jim “the Anvil” Neidhart and granddaughter of the late Stu Hart.
A former Divas Champion, Natalya has found it difficult to break through and stand out in the muddled mess that is the current Divas division. She remains a favorite among Internet wrestling fans.

Last seen as Tiffany in WWE, this beautiful blonde recently made her debut on Impact Wrestling, serving as a special referee for the Knockouts division.
With experience on the microphone and in backstage segments from her days as the general manager of the rebooted ECW brand, Taryn has the ability to move outside of the ring and contribute in other facets of the TNA television product.

A member of WWE’s main roster for four years now, Alicia has held the Divas Championship and has proven to be one of the more athletic women on the roster.
Recently, television time has been few and far between for the Florida native but Alicia has served as a tremendous spokeswoman for World Wrestling Entertainment and its interests, such as the Be A Star anti-bullying campaign.

One of WWE’s top developmental Divas, Audrey has already captured the FCW Divas Championship and has steadily improved her in-ring work since debuting.
Channeling the Mickie James “country girl” character, this Houston native has recently feuded with Raquel Diaz.

The former Angelina Love, Williams recently departed Total Nonstop Action Wrestling after five years with the company.
While with the company, she collected multiple Knockouts titles and was among the most popular women in the sport, especially when partnered with Velvet Sky as the Beautiful People.
Now making her way across the country in various independent companies and appearing at many conventions, it remains to be seen if Angel Williams will ever get another shot on national TV again. For her fans’ sake, I hope she does.

The current Raw General Manager, AJ paid her dues, climbing through the ranks of the independent scene before signing a developmental deal with WWE. From there, she finished third in the NXT competition. A call-up to the main roster nearly a year later netted little result.
Then, she became Daniel Bryan’s girlfriend and her dependent, unstable character took off. She became a breakout star in 2012’s WWE and soon become one of the company’s most popular performers.
A promotion to the authority figure role on the sport’s No. 1 program shows the company’s commitment to AJ and is an indicator of great things to come

Maxim cover girl. A member of the 2012 Maxim Hot 100. The most popular woman in wrestling, prior to the rise of AJ Lee. Divas Champion. Kelly Kelly has accomplished a lot since debuting in 2006 as an “exhibitionist” during the reboot of ECW.
One of the first model hires of John Laurinaitis, not much was expected of the 19-year-old. Six years later, she is WWE’s most marketed Diva. While she is currently taking a break from the road, Kelly remains one of the business’ most visible females.

This French-Canadian is a former two-time Divas Champion and, at one point, seemed destined to be the future breakout star of WWE’s Divas division. A cocky, arrogant heel character, Maryse knew she was hot and had no problem flaunting it.
By the time she won her first Divas title in 2008, she was also a rapidly improving professional wrestler. Unfortunately, a knee injury put a halt to her progression and when Maryse returned, she was never the same in the ring as she was prior.
The role of valet and host of NXT did nothing to make her stand out and in 2011, Maryse was granted her release from WWE.

The original Diva Search winner, Christy Hemme is the female sports entertainer to sell the most copies of a Playboy magazine in which she was featured on the cover. After unceremoniously being dismissed from WWE in 2005, Christy became a member of the TNA roster.
A manager early, it appeared as though Christy had finally broken out when she impressed in a few encounters with the massive Awesome Kong.
A neck injury ended her in-ring career and Christy became a backstage interviewer and ring announcer for Impact Wrestling, a role she holds to this day.

The self-proclaimed “First Lady of Ring of Honor,” this former WWE Diva was one of the most popular during her days with the company.
A Playboy cover girl and inaugural Diva Search competitor, Maria made her debut in the business in 2004 and remained a WWE employee until 2010, when she was unceremoniously released from her contract.
Always bubbly and personable, she filled whatever role was given to her, including that of a ditzy blond interviewer, despite being considered fairly intelligent off-screen.
Now serving as valet for real-life boyfriend “The Prodigy” Mike Bennett in Ring of Honor wrestling, Maria continues to entertain fans around the world