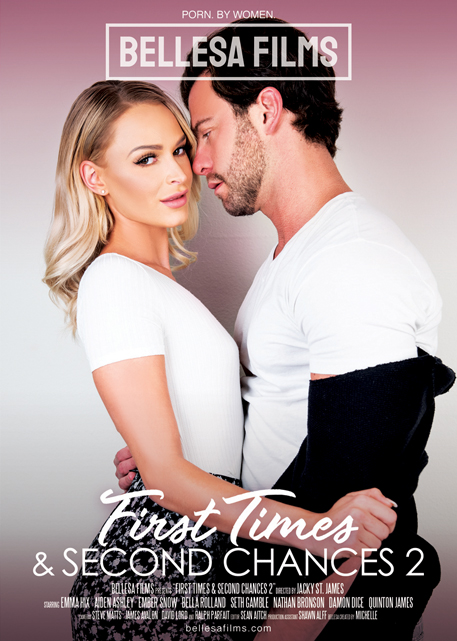 “First Times & Second Chances,” returns in the second chapter of the sensual new series from Bellesa Films, a new studio created by women for women. Distributed exclusively by Mile High Media, the movie is now available on DVD.

“Cover model Emma proves she is all that and more as she reveals her inner bad girl in her intense scene opposite Seth Gamble,” St. James said. “Fans of the first chapter will be captivated by the beauty and energy of our cast of stars who definitely brought their A game to this exciting new release.”

“First Times & Second Chances 2” begins with the story of Bella who is done keeping it professional with Quinton and resolves to get him to let loose and give her what she wants. Next, Emma and Seth end up back at her place after a great second date, but once there they decide to take things carefully and conscientiously.

In scene 3, Aiden needs a top-notch chef to cater her dinner party, so she calls her ex, Nathan for help. But with a well-placed dash of whipped cream, everything that was once sweet comes flooding back to them. Next, Ember’s boyfriend leaves her behind at a party because of jealousy issues, so she goes over to Damon’s place, where their mutual heat boils over.