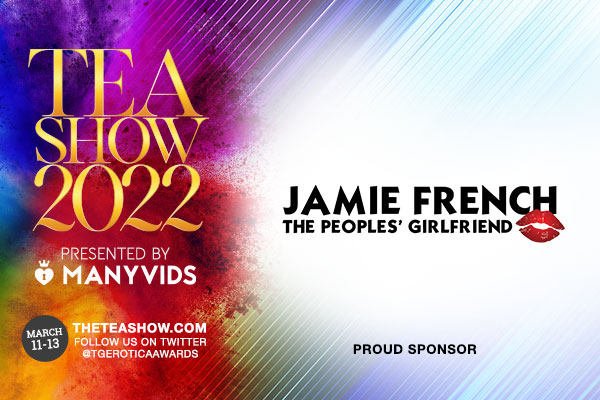 “As a decade’s long sponsor of the TEAs, it’s incredibly gratifying to see just how much the event has grown in size and scope over the years,” said French. “The TEAs continue to mean so much to our ever-expanding community of performers and producers. What was once an intimate gathering designed to appreciate the underrepresented, is now an industry pillar in its own right, awarding the efforts of what are now some of the most recognizable talents in all of the adult entertainment industry. I feel very privileged to continue to be able to play a part in the ongoing progress of the TEAs!”

“Jamie has supported the TEAs throughout its many iterations,” added TEA Executive Producer, Kristel Penn. “She was a sponsor in our early days, before the Avalon when we were a smaller community show without a lot of support. The success of the TEAs has been, in no small way, because of performers like Jamie who believe in being part of our community in this larger way.”

Jamie French is a veteran performer and producer of the adult industry currently based in Las Vegas, NV. She has received numerous accolades over her illustrious career, including the 2015 TEA Best Solo Site Award and 2016 TEA Best Scene Producer Award winner.

French also produced and directed groundbreaking titles, Trans6uals 1 and 2, for Grooby Productions. In 2018, French also signed with TransErotica as a contract model. Visit her official website at ClubJamieFrench.com or follow her on Twitter at @Jamie_French.