NL- I interviewed Jenna recently and she is far from dumb! She was quite candid, interesting and smart actually. I’ll post our interview soon. 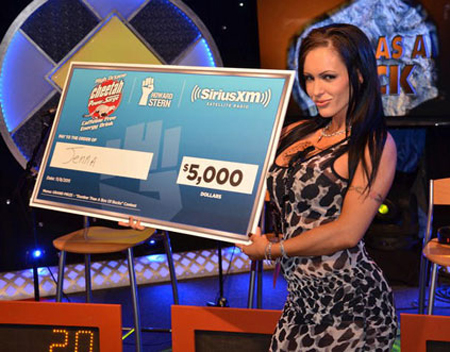 For the second question—GM is the abbreviation for what company?—Jenna again went third and was the first to respond correctly, saying it stands for General Motors. The group all flubbed question three, the spelling of “retarded,” but question four was again a moment for Jenna to shine. Asked the first name of the first lady, she was not only the only contestant to know the answer (Michelle Obama), she was the only girl to know what the first lady is.

Jenna also knew that a pickle is made from a cucumber and almost got the location of Tiananmen Square correct (she guessed Japan), but it was her knowledge of who invented the telephone—Alexander Bell—that put her over the top. That little electronic object that every girl in the adult industry uses 100 times a day, it took a superstar like Jenna Presley to let them know who was behind it and it wasn’t Steve Jobs.

For those who missed the show or just need to hear more of Jenna’s lovely voice, they can check out her appearance on the Uncle Eddie Ham Radio Show at http://shows.brainstumedia.com/2011/10/25/ham-radio-october-25th-2011.aspx or download the Paulie K Show podcast on iTunes or at http://web.me.com/paul.bernardo/Paulie_B_Website/The_Paulie_K_Show/The_Paulie_K_Show.html. For the official Howard Stern synopsis of the Dumber Than a Box of Rocks segment go to http://howardstern.com/.