Jeremy Steele on The Discovery Channel
(Season One, Episode One of “Blood Relatives”)! 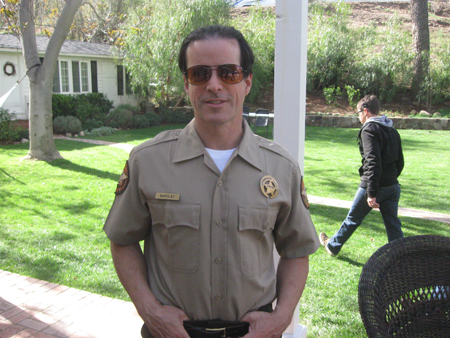 This series really starts off with a bang. In fact, episode 1 is about a guy who shoots his whole family up, down in Georgia, killing everyone but the wife, who barely survives.

Joining me in this real life enactment was a real life CHP cop, portraying the fellow deputy who arrives at the scene of the crime. It was a good idea getting a veteran to assist me in reenacting the proper techniques of 911 murder calls so to better know what the fuck I was doing.

Additionally, Mother Nature lended her support, gifting us with some beautiful aescetics to the grim drama by providing a steady, medium level rain throughout the deputy squad’s arrival. The cold air provided natural fog, with a high placed light illuminating the steady rain, as the squad car rolled into the driveway, quietly with beaming eyes.

The neck of the woods we were representing was rural Georgia, which hosts rains with much more frequency than the area north of L.A. in which we were.

So, me and the real life cop are inside the Sheriff’s car. I’m driving. A walkie is inside relaying instructions for us to start driving and make our entrance.

Following rehearsals and instructions, we get out, take a beat to ready ourselves; illuminated rain still steadily coming down as if by cosmic design; flashlights on and guns drawn.

We each walk somewhat sideways around either side of the front door. With a look of meeting eyes and a nod, I signal to him to open the door, which is unlocked. It is pitch black in there. With guns and light drawn, he crosses and enters first, covering the left side of the entrance way and adjacent hallway. Following him I enter to the right, walking
on my heels, sideways, knees slightly bent for swiftness and silence.

With my left wrist resting over my right wrist, flashlight parallel to my drawn gun, and pointing in the same direction, I quickly scope inside a glass walled room to the right, then across the living room, from center to right, intentially rolling the light through the camera lens and past it for effect. And then I see the body…

A lady (approximately 55) lies face down in a pool of blood surrounding her face.

Putting my gun back into my holster, I kneel besides her, touch her neck with two fingers, recognizing she’s still breathing… barely.

I relay to dispatch that we have one “elderly” lady down, possible gun shot to the face, still alive. Then, in accordance with the director’s instructions, I laid a reassuring hand on her upper back, rubbing it firmly, telling her to hang in there and that an ambulance is on the way.

I signal for my partner to check the area of the house to the right of me, while still looking around, and expressing various emotions which just came through the naked eyes and anchored facial expressions, as I just lived the moment instead of “acting” it.

I double checked to see that my name would be in the credits, and he said, “Of course!” (under my real name: Jeremy Feit- pronounced “fight”); that I’m one of the principal actors in this. He also said he wanted to get my email to make sure I get a screening copy of the show, as well as having my contact information for possible future projects he may be involved in.

Other scenes I was involved in included standing outside afterwards talking with the Sheriff, the other deputy and foresics, as well as examining the window in the backyard which the killer broke to get into the house.

I am grateful for having this work and the opportunity to participate and give something to this project. And why wouldn’t I be?

Also, they say every set has a gopher, and there actually was one, so I got a photo of it as well, thinking of the Caddyshack opening song “I’m all right (Don’t nobody worry ’bout me)”.

Additionally, during the same week, I played a Boston cop on another show, but due to signing a “nondisclosure” agreement I am not allowed to talk about any of it. 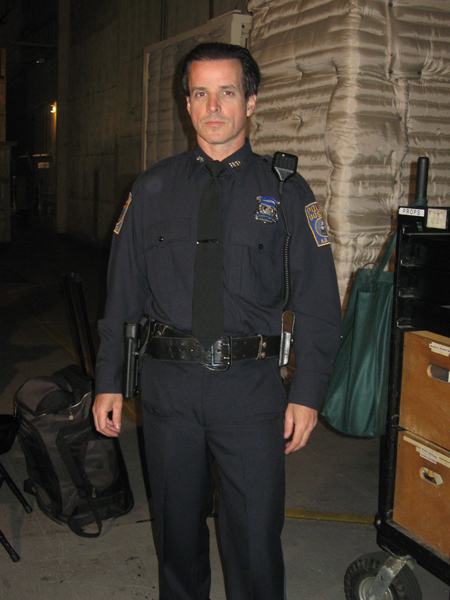