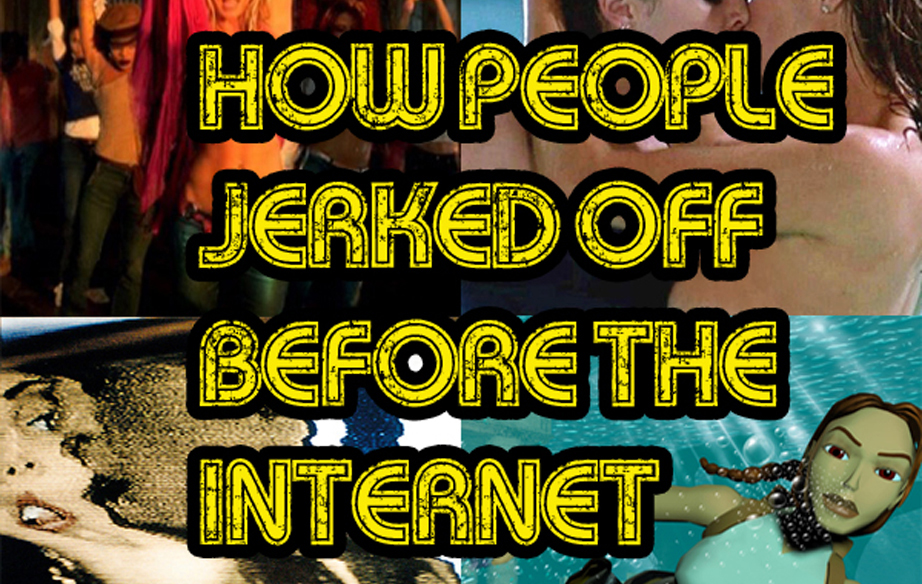 I remember waiting eons for my dial-up modem to spit out a badly photoshopped image of a nude Kelly Kapowski, my finger steadily hovering over the mouse, ever ready to minimize in case mom and pops busted through the door without warning. These were nervous times with the pickings being slim to none. Suffice it to say, one got really fucking good at memorizing fleeting images and saving that shit in one’s spank bank.

Without further adieu, here’s how people jerked off before the internet!

Game developers knew how badly deprived we were so they started coming out with all these fucking video games starring busty, scantily-clad female characters in tight-ass spandex. Thank you pause button.

I hate wrestling but goddamn it if I wasn’t caught in front of the T.V after my Saturday morning cartoons ended watching this shit in my loose-fitting pajamas. Wrestling chicks were sexy as all hell. Nowadays, they don’t call it “TNA” for nothin’.

Sex really does sell. Nothing like some big, supple tits and ass bouncing to an old-school groove. The beats were fresh but the booties were truly bumpin’! Sexy music videos full of gratuitous skin were my bread and mothertruckin’ butter.

Oh, Baywatch. You knew exactly what you were and didn’t try to hide it and I loved you for it. Your tissue paper-thin plots were just an excuse to showcase hot and sexy ladies frolicking along the golden sands. With stars like Pamela Anderson, I faithfully tuned in to this shitty-ass show like drunks flock to dive bars for cheap drinks.

Imaginat- what? There’s no chintzy picture here because that’s the point of numero five – using your imagination to jerk off! It sounds absolutely insane but there were times when people just clutched their eyes shut and used what’s called an “imagination” to become aroused! Here’s a little thought experiment, especially for you fellas reading: take as much time as you need and TRY with just your MIND to pop a boner.

So you’re having a sleepover with all your buddies and after you’ve burnt out your nintendo and ate all the candy, you turned on the t.v on real low volume and like a goddamn ice cream truck jingle, you’d hear that corny-ass cabana music play and before your eyes processed the images gleaning off the television screen, you already knew what you were about to see – the patented “Girls Gone Wild” commercial. You had roughly about thirty seconds of network commercial air to jerk off before some crappy public access show started. Ready, set, grow!

My dial-up modem sounded like two fax machines fucking the shit outta each other. The end result? A poorly photoCHOPPED image of eternally hot “Saved by the Bell” babe, Kelly Kapowski. My dick didn’t care that this shit was obviously fake. But goddamn it, if someone picked up the phone during your transfer, you’d have to reset and start your download all over again. Jerking off before the internet was a pain no one should have to endure.

If you had cool-ass parents, you know what I’m talking about and even if you didn’t, you always found a way to finagle free softcore “television” at your buddy’s house who did have cool-ass parents. I remember how excited I was to see simulated sex. Even premium network T.V couldn’t show full-on fucking so all you got were two people grinding on each other in low-art sensual camera cuts. Yes, I know it seems appalling to peer into the past of jerking off old-school but that’s how we got by!

Before 50 Shades of dogshit slammed people’s tender sensibilities, there was Mickey Rourke using just an ice cube to make Kim Basinger’s ovaries quiver. Nude movie scenes were the goddamn shit and I loved them, except for that weird, ultra-awkward moment when you were watching a seemingly innocuous movie with your parents and BAM, nudity!