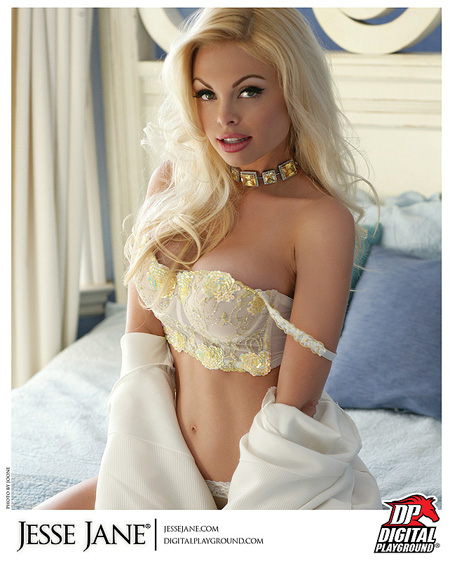 LOS ANGELES — Jesse Jane told XBIZ on Monday she has re-signed an exclusive contract with Digital Playground and will remain with the company until the end of her adult performing career.
“I’m not going to leave them,” Jane said. “We’re a family so we’re staying together like it should be. My contract was supposed to be up and it was a choice of whether we wanted to re-sign or not. Digital realizes and I realize that we belong together and it would be just weird to be any other place.”
Jane, who has been with Digital Playground since the beginning of her career nine years ago, said the new contract — her third one — is for three more years after which she will retire from doing movies. The Oklahoma native said she was relieved to officially re-sign and put an end to the months of speculation about her status.
“I’m glad it’s over,” Jane said. “Everything is back on track. People start rumors and just want to make up what they want to make up. Honestly, I couldn’t be with anybody but Digital Playground. This is what I’ve known for over nine years.”
Digital Playground CEO Samantha Lewis said, “Jesse Jane is by far the biggest anomaly that the adult entertainment industry will ever experience. Her dedication, loyalty, beauty and charm have kept her at the top and we are so grateful that our partnership will continue. She started her career with Digital Playground and she will go out being a DP girl forever.”  Digital Playground founder Joone agreed.
“When we discovered her nine years ago, we knew she was going to forever change the face of our industry,” Joone said. “Her unrivaled success and the fact that she is still the most demanded porn star on the planet affirms our belief.”
Jane’s soon-to-be-released movie “Fighters” showcases her in the most dramatic role of her career.
“I worked so hard on that. It’s probably the hardest one I’ve ever had to do,” Jane said. “Kayden [Kross] and I had to train in boxing for three months because we had to be believable as boxers.”
Jane said she gained muscle and weight for the role, and also had to tap into an emotional side on screen that she had not previously been asked to do.
“Luckily, I had [director] Robby D. to help me go there because I’m just not a sad person,” Jane said. “There were two different situations where I had to make myself cry and he kind of talked to me like, ‘ Think about something that would just devastate you.’ And I just went there. I’m really proud of what we did.”