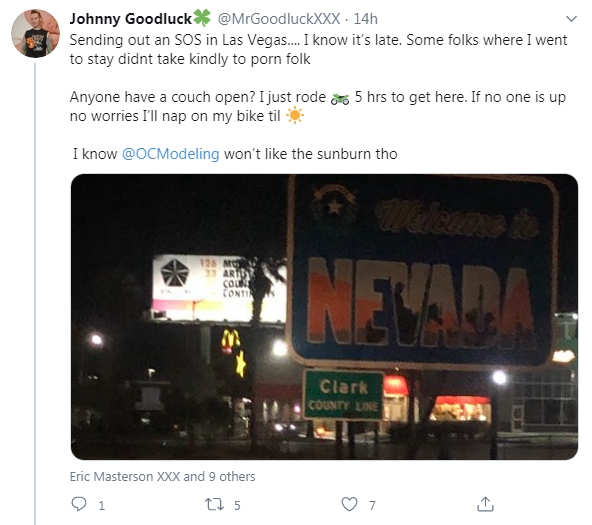 Johnny Goodluck is, and always has been that mope who thinks he’s Xander.  He once tweeted this:

So May 2nd, Johnny took to Twitter to let everyone know he tested and was clean. My first question is, why? Why does the guy who doesn’t really shoot much get tested during a pandemic/shutdown?  And why does he post the results online? And why does he tag his agency OC Modeling in the tweet if they aren’t booking shoots?

This is the part where Johnny’s PR company steps in and asks him to delete those tweets. But Johnny uses Shrek aka Erika Icon, all she cares about is her next check.

Erika tends to forget that PR stands for Public Relations, a publicists job is not just press releases and interviews, it’s also doing your best to advise clients on ways to NOT appear on TRPWL, a job Erika has failed at yet again.

I wonder if Johnny tweeted out his testing status for another reason, maybe he wanted a certain person to see it.

Johnny, the flaccid penis gym guy apparently isn’t over the girl. Last week, in what I can only assume was an effort to get the girls attention, liked over 20 of her tweets, and when that didn’t work:

Johnny drove 5 hours to Vegas to try to see her. He made this tweet early Monday morning which has since been deleted. My guess is he was trying to stay with her, but he knocked on the old apartment door, and was forced to reach out to Twitter Land for a place to stay.

She wound up blocking him on all fronts, which prompted him to use a friends phone saying it was his “new number,” she didn’t respond to any of his messages.

Lets hope this post is the end of Johnny’s obsessive behavior. I won’t be as kind next time.