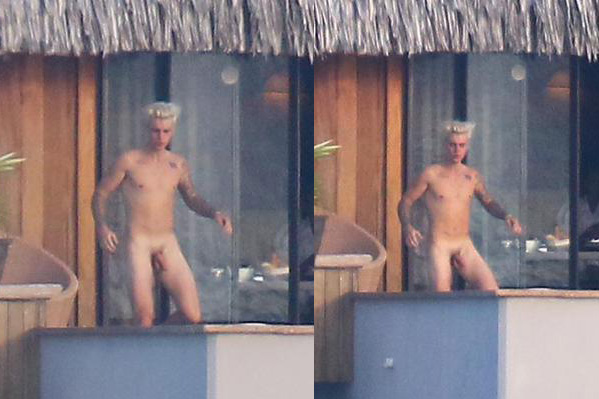 First we got a flash of NBA player Lebron James’ dick and next it was Lenny Kravitz dick  but it looks like the paparazzi have finally got a glimpse of Justin Bieber in all his glory. When he was away on vacation with what we suspect to be his new girlfriend, Jayde Pierce.

He was vacationing in a bungalow in Bora Bora when a dick pic was snapped. He was chilling on the patio of his room which actually sounds incredibly relaxing. Earlier this year Justin Bieber flashed his ass at the camera but of course this is creating way more controversy.

Lately men have been the ones being exposed and shared in popular media. Paparazzi dick pics are topping full frontals and Twitter is blowing up. Is this problematic? Probably… but in the meantime girls and gays everywhere are wooing and sharing them.

It is clear now that Justin Bieber has definitely hit puberty, and that joke is now way behind us. Some are even saying that he’s incredibly well endowed, but of course there are some prison jokes in there. Baby, baby, baby oh!

Lucky for him with his hot vacation buddy, it looks like he’s putting that dick to good use. Then again people are skeptical on whether this is even him, and my only answer for that is I really don’t know.

Anyway check out the collection of Justin Bieber dick pics we managed to scour from the internet and if that interests you check out our porn.com videos of other dicks… seriously we have tons of them. All the dick, all right here.

Or you could read more about Justin Bieber from that time he got FUCKED and his adventures with a Brazilian prostitute because we always seem to fit him in. Pun intended.